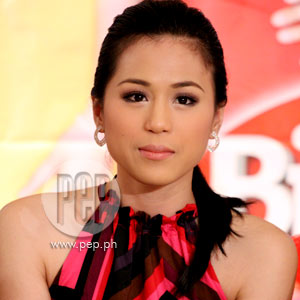 Pinoy Big Brother host Toni Gonzaga and her family are currently extending help to those affected by typhoon Ondoy in their hometown, Taytay, Rizal.

The TV host-actress-singer resides in Taytay, Rizal—one of the badly affected areas ravaged by typhoon Ondoy during the weekend. In a recent report posted by the National Disaster Coordinating Council as of 3 p.m. today, casualties are estimated to have exceeded the 300 mark with some areas, particularly Pampanga and the Cordillera region, yet to be accounted for in the latest tally.

Although the floods have already subsided in some areas surrounding Taytay, the intensive relief operations conducted by both government and non-government organizations, plus the damage done by the disaster, left traffic routes in the entire province and neighboring cities crippled.

SAFE BUT STRANDED. Toni and her family were fortunate that the village where their house is located stands on much higher ground.

Toni still tried to report to work last Saturday, September 26, despite Ondoy's continuous onslaught. But like everyone else who tried to brave the bad weather, Toni proved to be no match to nature's fury as it submerged the metropolis to flood waters.

"But as soon as I got out of the village, the Ortigas area na pinakita 'yong Rosario where I everyday pass, talagang wala na. It was too late," Toni said with tinge of resignation in her voice.

The aftermath of Ondoy was vividly painted by Toni for the press to fully understand: "Last night when I passed, it was so dark na akala mo scene sa I Am Legend [Hollywood film starring Will Smith].No, the cars were scattered in the street, there are so many stuff in the street, sofa, mga used tires... Talagang abandoned talaga."

EFFORTS TO HELP. Toni is an active member of the Taytay community, having served as Barangay Kagawad for five years before she became a certified celebrity.

With hundreds of Taytay residents displaced and their livelihood totally wiped out, the Gonzagas along with their neighbors who escaped the flood immediately initiated a drive to help those in dire need of assistance.

Toni is one of the regular hosts of E Live, along with Mariel Rodriguez, Bianca Gonzales, and Luis Manzano.

Despite the tragedy, Toni said that the incident reignited the Pinoy's highly-admired bayanihan spirit.

Toni also touched on the subject of global warming and its catastrophic effects to mankind as shown by the recent calamity.