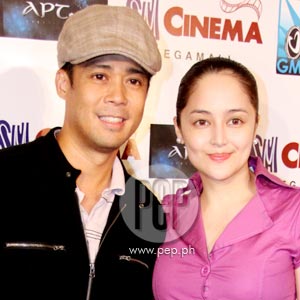 The husband-and-wife tandem of Dingdong Avanzado and Jessa Zaragoza mark their return in the recording scene through their respective new albums. Jessa launched her latest album, Jessa Sings The Great Musical Icons, last October 10 at Eastwood Mall in Libis, Quezon City. Dingdong's comeback album, on the other hand, is reportedly entering its final stages of production.

Dingdong Avanzado played the role of a supportive husband last Saturday, October 10, at the launching of his wife Jessa Zaragoza's new album held at Eastwood Mall in Libis, Quezon City.

Titled Jessa Sings the Great Musical Icons, the singer dubbed as the Phenomenal Diva—brought mainly by the massive success of her Filipino "jukebox" hits in the past like "Bakit Pa?"—dished out nine songs from the album while Dingdong patiently took pictures and videos of the event from the front row before settling on the left side of the stage leading to the finale.

Dingdong's involvement in his wife's latest project dates back to the actual recording where he served as one of the producers along with Elmer Blancaflor, Brian Cua, and Jimmy Antiporda.

The 13-track all-revival album is Jessa's comeback album after six years of inactivity in the recording business. Jessa's last record, Kahit Na Ilang Umaga, was released in 2003 under Star Records before she and Dingdong decided to settle in the United States.

Recording and production for the new album were done intermittently depending on Jessa's availability. After months and months of irregular studio time, Jessa decided to spend more time here in the country to finally wrap things up.

NO MORE POLITICS FOR DINGDONG? Jessa is equally supportive of her husband's upcoming comeback album, promoting it in advance by describing it as: "Naku, ibang klase!"

For the said project, Dingdong mentioned working overtime to produce an album composed of original materials touching on the concept of love and even topical subjects.

Jessa's excitement when it comes to Dingdong's return in the music scene, however, doesn't extend to her husband's possible re-entry into the political arena.

Dingdong, who assumed a political post in Quezon City some years back, acknowledged being courted by some quarters to give politics another shot in time for the 2010 national elections.

He revealed: "Hindi maipagkakaila na ang daming nagtatanong sa akin. Ang dami ding nagtutulak sa akin to pursue it. Ako naman, as long as the desire to serve is there, why not? Pero right now, I'm really weighing my options. I'm not closing my doors. It's just a question of kung kailan tsaka 'yong right timing."

Nothing is still certain at this point and Dingdong fully understands Jessa's concern should he decide to run for public office anew.