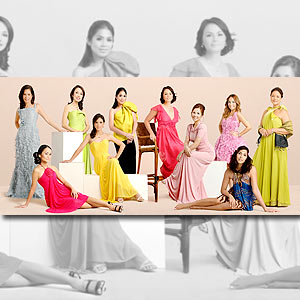 "We did not only choose them for their achievements and their excellence in their respective fields. We chose them because they pursue their dreams and they dare to develop their passion," said Ms. Tippy Benedito (not in photo), Lifestyle Network's channel head, about the women who got included in their list of 10 Outstanding Women. They are: (from left) ABS-CBN Foundation managing director Gina Lopez, ballerina Lisa

In celebration of its first decade, the cable TV channel Lifestyle Network picks 10 iconic Pinays who have made an impact in their respective fields.

These women are chosen by Lifestyle Network because, according to its channel head Ms. Tippy Benedito, "[They are] special to us, they are our leaders. They are the women that we admire the most because of their characters and achievement in life.

"We did not only choose them for their achievements and their excellence in their respective fields. We chose them because they pursue their dreams and they dare to develop their passion."

They are given recognition on Friday, October 23, during the opening of the Lifestyle Network's photo exhibit at the 2nd floor, Archeology Wing of Power Plant Mall in Makati City.

THE 10 OUTSTANDING WOMEN. In an interview with PEP (Philippine Entertainment Portal), the Philippine Ballet icon Lisa Macuja-Elizalde says it's an honor to be considered a Pinay icon.

She also tells PEP that it's a good way to celebrate her 25th year as a ballerina. Lisa relates, "Normally, ballerinas don't reach more than 15-20 years or seasons, actively dancing. So, for me it's an achievement that I'm still dancing and that I still feel very competent and strong, confident with my body."

She also gives some advice to aspiring ballet dancers.: "First, decide early in life that you want to become a ballet dancer or ballerina. Second, go to a really good teacher because ballet is taught and handed down from one generation to the next. You're not born a good dancer, you're made into one. Third, don't be afraid of pain and perspiration."

Stage actress Menchu Lauchengco-Yulo is also grateful to be one of the 10 chosen Pinays. She says, "This is the first time I was honored in this sort of way. I'm very proud to be put against these women who have accomplished more than me really, some of them have survived so much more painful experiences than I have. I'm very, very proud to be here."

When asked how she plans to help the theater industry, Menchu replies, "I would like to now help by passing on what I have learned to the younger generation kasi sila ang future ng theater. So, as much as I can, I do a lot of workshops, I teach, I coach them, sometimes they go to my house. That's what I want to pass on kasi, I want them to have the same foundation that I have."

While most women in the list are known in their chosen career, the host of Umagang Kay Ganda feels that she's not yet worthy to be called an outstanding woman.

She admits, "I'm very honored to something as huge as this. Sometimes, the result of seeing all these women and their accomplishments, I feel so small. I feel that I have yet so much more to give. Napag-isip ako ng husto after I was told about this. I realized I don't do enough for our country. So, it's a good thing to reflect on and to realize that there's still so much work to be done."

Gina Lopez is included in the list for her involvemnt in socio-civic efforts. She is the big boss of ABS-CBN Foundation.

She does these projects wholeheartedly because, "What makes me happy even more is when you're able to make a difference. 'Yong nakikita mo 'yong buhay na talagang naiiba, 'yon ang talagang pagkain sa puso."

She takes this opportunity to call on people to participate in the fund-raising marathon of Kapit Bisig para sa Ilog Pasig on November 8 at the Quirino Grandstand in Manila.

Learn more about the stories of these women in a TV feature that will be aired on Lifestyle Network. Their portraits are also being presented at Lifestyle Network's photo exhibit on the 2nd floor, Archeology Wing of Power Plant Mall in Makati City until this Saturday, October 31.