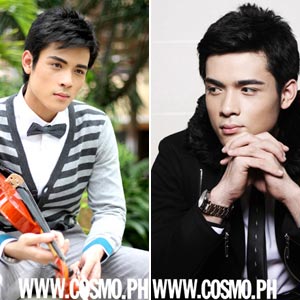 See Xian Lim channeling Boys Over Flowers on www.cosmo.ph , where he brings to life the four leading men of the now-defunct Korean TV series for the entire month of November. Watch for the exclusive interview video and behind-the-scenes footage of his Boys Over Flowers-themed shoot, only on

Long after the Korean hit TV series Boys Over Flowers ended its run in Manila, ladies are still kilig over those chinky-eyed male leads. On top of their sex appeal, the characters who make up the show's F4 are all very fashionable—which inspired Cosmo's website www.cosmo.ph to dress up their Online Hunk for this month in Boys Over Flowers fashion. And who better to play those lusciously lean Asian studs than Fil-Chinese Xian Lim?

He moved to Manila from San Francisco just last year, but already Xian is making pretty big waves on the scene. At only 20, the Katorse star was recently hailed as one of the 10 hottest men in the country by Cosmopolitan Philippines, who drew the most shrieks and cheers from the crowd during the Bachelor Bash.

But there's much more to Xian than piercing eyes, chiseled features, and a buff body. As Cosmo.ph got to know its Online Hunk for the month of November (CLICK here) better, in relation to the Boys Over Flowers characters, the Fil-Chinese hunk reveals his gentler, more sensitive, and more down-to-earth side.

XIAN, THE MUSICIAN. One thing fans probably don't know about Xian is that he's a big music enthusiast, having taken up symphonic band for six years. "[I play] a lot of musical instruments like piano, trombone, saxophone—which I'm learning right now—French horn, and I'm trying to learn the guitar like everyone else here in the Philippines," he says.

Xian also appears to be an unabashed mama's boy. "For Valentine's Day, I bought [my mom] balloons, flowers. [It was] something simple but she really appreciated it." He shares that his mom, a piano teacher, is responsible for instilling in him his passion for music.

ROMANTIC GUY. Xian is quick to admit that he's a romantic guy. When asked to describe his courtshipstyle, he replies, "More the old-fashioned type na pupunta sa bahay, magpapaalam sa parents, magdadala ng flowers and chocolates, I think that's the way to go."

The Katorse star admits that there's a downside to dating him—he easily gets jealous! "Yeah, super-jealous type. Maybe since I'm the only child. Gusto ko more attention on me. Doon siguro nanggaling yun."

When asked what the best thing a girl has ever said about him, he replies, "Maybe that I'm a nice, sweet guy." Cosmo.ph probed to find out who gave him this compliment. Could it be his Katorse co-star Erich Gonzales, who he's rumored to be dating?

Xian just flashes a cryptic smile and replies, "That special someone."