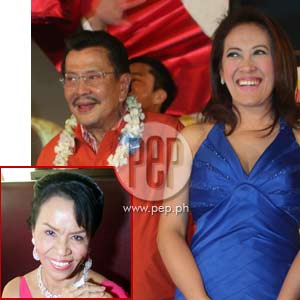 The premiere of Star Cinema's latest offering Ang Tanging Pamilya last night, November 10, at Cinema 10 of the SM Megamall, Mandaluyong City, was a rousing success, based on the number of people who attended the special screening.

Veteran actor Eddie Garcia and Estrada's son Sen. Jinggoy Estrada, who has a cameo role in the film as his father's younger version, were also spotted.

The cast members of Ang Tanging Pamilya bannered by comedienne Ai-Ai delas Alas, Sam Milby, Toni Gonzaga, Mommy Dionisia Pacquiao, and Estrada, along with the other cast members, entered the cinema at the same time.

After the cast members each gave a short speech to acknowledge the audience, followed by the singing of the Philippine National Anthem and a short prayer, the first public exhibition of the comedy film officially started.

While Ai-Ai delas Alas and Erap's timing for comedy is a given, Mommy Dionisia gave the movie additional comic firepower. The audience inside the movie house showed their appreciation by laughing wholeheartedly over most of her scenes. The mother of boxing sensation Manny Pacquiao certainly was able to hold her own ground in the company of her more experienced co-actors, making her a crowd favorite last night during the event.