Rajo Laurel's top choice of celebrities to dress up 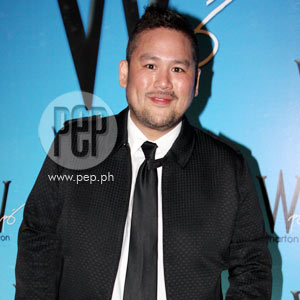 One of Manila's top fashion designer Rajo Laurel launched W by Rajo, his newest clothing line for men. PEP (Philippine Entertainment Portal) asks him who are the celebrities he wants to dress up. His choices include sexy heartthrobs, divas and movie queens of the past.

Rajo Laurel, one of Manila's top fashion designers, once again showcased his expertise with the launching of his newest clothing line for men, dubbed "W by Rajo."

W by Rajo is the first collaboration between Wharton and Rajo, a brand that will upgrade Pinoys' fashion sense at an affordable price.

At an elegant cocktail party last November 13 at the Establishment in the Fort, Taguig, Rajo dressed up some of his closest friends in elite society with samples from his collection.

With his glamorous designs and remarkable creations, it is undeniable that many socialites, personalities and celebrities favor Rajo Laurel to dress them up for different gatherings and events. In line with the launching of W by Rajo, his newest clothing line for men, PEP (Philippine Entertainment Portal) asked him who among the male celebrities he had not yet dressed up, made it to his top list of "men I want to dress up."

PIOLO PASCUAL. One of the most sought-after actors in the Philippines, Piolo Pascual makes a great impression on the celebrity designer. Rajo admits that he would love to dress up Piolo if he could. Aside from being an image model with Bench, Piolo has his own clothing line under the brand called "It Just Gets Better".

ALJUR ABRENICA. This young heartthrob, a product of GMA's reality-based artista search Starstruck, proves he is no longer a rookie as he makes it to Rajo's top list. Dubbed as RP's sexiest Man of 2009, Aljur Abrenica has become an image model for several men's wear, the latest of which is Bench's Raw Overhauled Jeans.

RICHARD GUTIERREZ. One of the highest-paid Filipino actors on primetime television and in movies also makes it big on Rajo's list of top male celebrities he wants to dress up. Rajo also names Richard as one of the cutest male actors in the showbiz industry.

DINGDONG DANTES. Who would ever forget Dingdong Dantes posing for a billboard ad in nothing more than Bench's underwear? It sure became controversial yet it was a catalyst for more endorsements of one the most popular actors in the industry. Dingdong Dantes bags a spot in Rajo's list.

AGA MUHLACH. An exception among the younger actors of Rajo's choice, Aga Muhlach lands on Rajo's top list of male celebrtities he wants to dress up. Aga is one of the most respected names in the Filipino showbiz industry and has also become quite in demand for product endorsements.

Meanwhile, Rajo gave a very interesting choice of women who he would like to dress up if he is given an opportunity. Rajo says he has been so fortunate to create clothes and designs for many people already that he'd probably chose the old stars like Paraluman, Rosa Rosal and Gloria Romero.

"Ï love the idea of old Hollywood and... well, old film fest... Parang the old heyday of the Pinilakang Tabing... So I would go back in time if I had the opportunity or the chance to do that... I would bring them back now in their prime and sort of like dress them up, you know, modern adaptations of my clothes..." Rajo said enthusiastically.

He also named the female celebrities on whom he likes seeing his creations, like Cherie Gil, Regine Velasquez, Sarah Geronimo, Zsa Zsa Padilla and Lea Salonga.