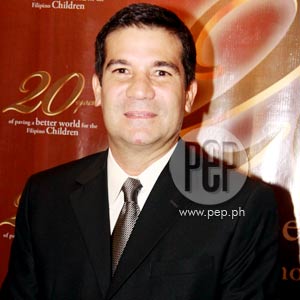 Before Edu Manzano (in photo) announced his vice-presidency bid, he had served as vice mayor of Makati City and as former chairman of the Optical Media Board.

In a press conference in Shangri-La Makati earlier today, November 13, Interior Secretary Ronaldo Puno announced that the former Optical Media Board (OMB) chairman will run as vice president under the administration's Lakas-Kampi-CMD ticket.

The announcement was a complete turn-around from reports last Wednesday that Manzano had already declined the offer to be Teodoro's VP. The actor was reportedly joining the Liberal Party to run as senator under the Noynoy Aquino-Mar Roxas ticket.

But Puno, who served as Manzano's mentor since he entered politics, said he convinced the former Pilipinas, Game KNB? host to run with Teodoro.

For his part, Manzano said he believes the former Tarlac representative and current Defense Secretary has the capability to "move the country forward."

"I would like to hitch my wagon with that of the good Secretary and be part of his team that would push the Filipino's future," Manzano said.

The announcement came a week before the filing of certificate of candidacy for the 2010 elections, which begins on November 20.

A POOL OF CANDIDATES. Before Edu Manzano was finally chosen, the ruling party floated many different names as their pick to run for the prime post.

Puno was the first official slated to run as Teodoro's running mate. But amid news that the party prefers another candidate, Puno backed out of the race, saying he prefers to maintain his post in the Department of Interior and Local Government.

The merged Lakas-Kampi-CMD then courted actress and Batangas Governor Vilma Santos to be Teodoro's running mate, but she declined. (CLICK HERE to read related story)

ALIGNED AGENDA. Teodoro believes Manzano's agenda and principles align with his own.

He also admires Manzano's "umatched intelligence," and genuine concern for the youth.

POLITICAL PROFILE. Manzano is no stranger to public service. In 1998, he was elected vice mayor of Makati City in a bitterly-contested election. He only got to assume his post after the Commission on Elections finally reversed an earlier decision that disqualified him from public office because he was born in the United States.

Manzano then ran for mayor in 2001, but lost to incumbent Mayor Jejomar Binay.

He battled piracy as the Chairman of the OMB from 2004 until his resignation last August of this year, when he cited plans to "consider other avenues of public service."

Manzano, also known as "Doods," is a popular actor who has appeared in around 100 films and 20 television shows in the Philippines. One of his more popular roles was playing Pinoy superhero Captain Barbell in 1986.

He was the former husband of the "Star for All Seasons" Vilma Santos, and the "Diamond Star" Maricel Soriano. He has one son with Vilma: actor and TV host Luis Manzano.

If he pursues his vice presidential bid next year, he might run against Binay, Joseph Estrada's running mate, for the second time. He may also run against Senator Mar Roxas and Senator Loren Legarda.