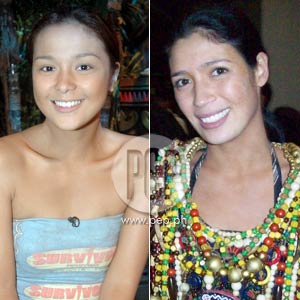 Survivor Philippines: Palau Season 2 winner Amanda Colley Van Coll (right), together with castaway finalist Jef Gaitan (left) are each wired to lie detector machines to see if they can tell the truth while under pressure.

Survivor Philippines: Palau Season 2 winner Amanda Colley Van Coll and fellow castaway Jef Gaitan are wired to separate lie detectors on Showbiz Central's "Don't Lie to Me" (Sunday, November 15). Do they have what it takes to stay calm under pressure?

Amanda and Jef are just a few inches away from interrogator John "Sweet" Lapus. He positions himself in the middle of the two as he prepares them for his controversial questions. Both Palau survivors, who had been tested on the island for their wit and physical skills, look more than ready.

First question: Marvin and Jef were undeniably sweet with one another. The two are also rumored to have been dating after the show. Are Marvin and Jef already a couple?

Amanda smiles, "Yes!" Jef contradicts her with a laugh and resounding "No!"

As it turns out, Jef's answer is a "Lie." She's left with no other option but to explain her side: "Dapat Marvin kasi ang nandtio, e. We're always together... and we're there!"

Is Marvin the reason behind Jef and her ex-boyfriend Nyoy Volante's breakup?

Amanda and Jef answer "No" and both lie detectors affirm their answers as "Truth."

The last question comes not from Sweet but from fellow Survivor castaway Justine Ferrer. She has her own question in store, which makes the two interviewees fidget a bit.

Once again, the two gave contradictory answers, with Jef saying yes and Amanda saying no.

Amanda reveals that she felt bad about Jef but she gives only a general statement. "Tapos na iyon matagal na iyon. Kaunti lang naman ang sama ng loob. We had a plan from the beginning na okay na until what happened with Jef."