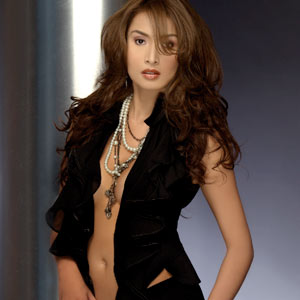 The launch of Phoemela Barranda as the new endorser of Get Laud coincided with the unveiling of the Holiday Collection 2009 of the locally manufactured clothing line.

Model and TV host Phoemela Barranda fancies more than just ramp modeling and hosting these days. The statuesque entertainment anchor of The Buzz and TV Patrol recently replaced fellow Kapamilya star Roxanne Guinoo as the newest endorser of Get Laud, a locally manufactured clothing line. Phoem is expected to bring a fresh and "evolved" image to the brand, says owner Geraldine "Gigi" Laudencia.

The collection includes mini-dresses and jumpsuits offering a vast array of designs—bold and abstract prints, ruffles and sequins, graphic lines and floral patterns. Carefully selected accessories and belts also added a dash of sophistication to the ensembles presented that day.

According to area manager Mimi Tan, "Get Laud started as a dream, because Geraldine believed in the ability of every Pinay to shine. She thought of creating clothes that would complement the Pinay's passion for life...and the zest to be the best that she can be."

Owner Gigi explains that Get Laud's newest collection reflects two aspects: the economic recession and the evolution of their brand. The recession encouraged them to "create pieces that are versatile," giving value for money. This is where their primary product, the Multi-Dress, comes in, says Gigi. The Multi-Dress is a practical item that could be worn in as many as 60+ different ways.

She also told the press that Phoem embodies the evolution that they wanted to embark on as a brand. The move to change image models signifies the changes that they applied to Get Laud—the improvements in their designs, the material and fabric they use, and even the interior of their boutiques.

Gigi also said that they want to redefine fashion as "practical luxury." Their newly revamped image wants to come across as affordable and complete. This time, Get Laud! projects the feeling of looking elegant, like their endorser Phoemela Barranda, without having to spend a hefty sum.

CHANGE OF BRAND. With the expiration of Roxanne's endorsement contract, Get Laud! decided to enlist Phoem as their latest endorser because of her image as a host and actress.

"We want somebody who's really versatile," answers Gigi, referring to Phoem's multi-faceted image as a host, actress, and fashionista. Phoem can also easily endorse Get Laud!'s products on television, as well as in event appearances because they provide her with clothing for TV Patrol, The Buzz, and on her other events off-camera.

During the press conference, owner Gigi Laudencia explained that no bridges were burnt during the transition, and that getting Phoemela does not concern Roxanne's bankability as an endorser. "The past two years have been productive.We don't have any regrets. Happy kami with [Roxanne]. Fruitful din. Very productive. Okay siya. Every time na kailangan namin, nagde-deliver siya. It's just that we wanted na magkaroon ng change sa brand namin."

PROUDLY FASHIONISTA. Phoemela defines fashion as "the way you express yourself." The newest endorser of Get Laud elaborates, "Fashion kasi, you don't always have to follow it. They may set the trend, but for me, fashion is how you express yourself. You have to make your statement through fashion. It's the other way around for me."

She describes her personal style as simple yet trendy. "I keep classic clothes, and then I update it with trendy accessories. I keep it simple." Despite her preference for timeless pieces, Phoem admits that she likes to mix and match.

Her love for fashion also keeps her updated with the latest trends. "I add accessories to update my outfit. For me, it's very, very important yung cut ng clothes, na simple lang siya but you can play around with it. And of course, the material is very important. And affordable."

What fashion advice can she give to women who want to experiment with fashion?

"I keep it basic. I go for the trendy style, but I always consider my body type and what looks good on me," answers the fashionista, citing herself as an example. "Kasi di ba uso ngayon yung mga Bohemian? Let's say yung mga nakatali sa ulo, but it's not really my style. But if you'll go for that, pag medyo bata pa, you can also follow the style. And with me, anything that I want to wear, trendy, classy, I can play with it. I can mix it up, depends on my mood. But my rule talaga is, keep it simple and always, always look at the mirror, and see if it flatters yourself or your body. Dapat bagay sa itsura mo talaga."

She also reveals that she's friends with Angel, but Anne is still an acquaintance as of now.

Phoem's busy schedule requires her to put on a lot of cosmetics. For her cleansing ritual, she says that upon arriving home, she always makes it a point to remove her makeup. "I bring makeup wipes in my bag. That's essential for me, talagang kailangan 'yan. Pag nasa car pa lang ako, I remove na my makeup. But at home, simple facial wash and then moisturizer.

"I'm not really makikay," she admits. "I'm tamad to do it. I see to it to put moisturizer at night and during the morning, and also sunblock. Kasi nagkakaroon na tayo ng mga dark spots because of the sun. And I always keep my skin clean talaga."


Aside from being an entertainment co-anchor, Phoemela used to be one of the participantes in the now defunct reality show Pinoy Fear Factor.