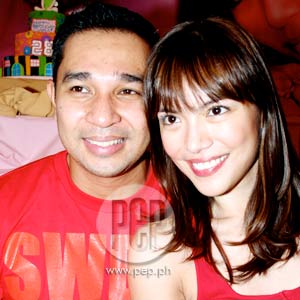 Singer-actress Ciara Sotto and longtime boyfriend Joe Oconer are planning to tie the knot next year.

The two lovers were engaged last March during an out of town trip to Laguna in which Ciara confessed being caught flat-footed by Joe's unexpected proposal. To build up the romantic moment, Joe made Ciara stroll the vast open field while talking aimlessly to keep his girlfriend from being suspicious.

Ciara's intuition proved to be accurate. Joe asked for her hand in marriage before saying, "I should have done this a long time ago when we met."

NOTHING'S FORCED. Though it took Joe four years to muster enough courage to finally propose, Ciara in hindsight believes that the relationship was heading smoothly in that direction. The singer-actress took note of the fact that everything between them felt natural right from the start when they first met during one of Eat Bulaga's U.S. visits.

Ciara is confident that settling down would not affect her drive for work. The singer-actress is still trying her luck in the international scene. In 2007, Ciara left the country to perform in Las Vegas. She was also chosen to sing the Philippine National Anthem in Manny Pacquiao's boxing match against Mexican Juan Manuel Marquez early last year.

"Talent naman doesn't have anything to do with your status, like if you're married, separated or you have a child, di ba?" she argued. "That doesn't make you less of a person or a performer, and he knows naman that I'm married to my career even before I met him [Joe]."