KC Concepcion and the Gutierrez twins' trip to Paris 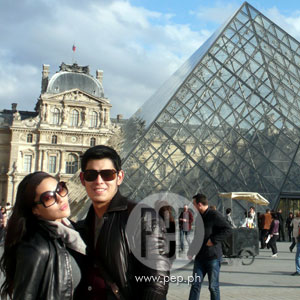 This photo was taken outside the Louvre Museum in Paris, says photographer Raymond Gutierrez. “Actually, marami ring Pinoys there, and nakilala rin kami. That’s why some of the security guards, parang nawirduhan sila. They’re, like, sino ’tong mga ’to? And then we were able to talk to some Pinoys. Some came from Ireland pa, and then ’yong iba naman taga-Davao… and they’re all there for vacation.

KC Concepcion and Richard Gutierrez, together with Richard's twin brother Raymond, left for Vienna, Austria, on September 27, 2008 to grace the special Pinoy screenings of their first movie together, Star Cinema's For the First Time. The hit movie, KC's first, also had screenings in Los Angeles and San Francisco, California, U.S.A.

The Vienna visit, according to Raymond Gutierrez, was exciting for the three travelers because it was their first time in the historic European city.

From Vienna, the trio moved on to Budapest, Hungary. "It's just two hours away by car from Vienna," says Raymond. "So sinagad na rin namin. We were, like, 'Let's go to Hungary for a day.'"

After Budapest, the three spontaneously decided to make a side trip to Paris. Raymond—who, with KC and Richard's permission, gave us the photos of the Paris part of their trip—explains:

"We were supposed to stay lang in Vienna for a week. But we decided, since we were able to go around Vienna na for the first few days—we were, like, 'Hey, let's take a side trip to Paris.' Niyaya kami ni KC. And kami naman ni Chard, siyempre, game kami.

The three stayed in Paris for five days and four nights. For Raymond, this side trip was the most exciting part of the whole journey. It was, after all, his first time in the city that was home to KC for four years. Richard had visited the city once before.

KC, who studied college at the American University of Paris, became the twins' translator and tour guide.

"Kung wala si KC, mahihirapan talaga kami ni Chard," Raymond admits. "Chard and I know only a few French words. But the two of them, naaliw sila sa akin because they were touring me around, and I was so amazed."