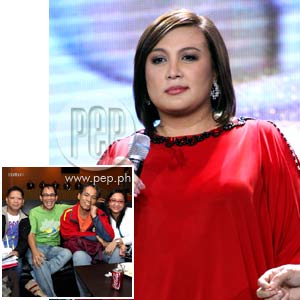 Megastar Sharon Cuneta is set to induct the new set of officers of the Entertainment Press Society (Enpress), on February 3 at the Imperial Palace Suites in Quezon City.

Despite her busy schedule, she already reserved the date for the induction of the writers' group, which is responsible for the annual results of the Golden Screen Awards.

A mass to be officiated by Fr. Larry Faraon will be held at 6:00 p.m.; the induction rite will follow immeidately.

The seven year-old Enpress, established in 2003, was formerly headed by Jun Nardo, who was also chosen as chairman of the board. He held the post from 2004 to 2007.

He was succeeded by Ricky Calderon, who served as club president for two years.

The Enpress members have started reviewing movies for the 7th Golden Screen Awards, which will be held on the first or second quarter of the year.