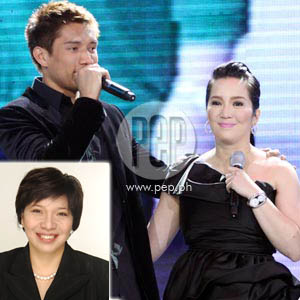 "If Kris really feels grateful for the mere fact that James deigned to marry her, well, no wonder their marriage is in trouble. No wonder Kris has been doing all the running when it comes to saving their marriage," opines psychologist Margarita Holmes (inset).

The Kris-James-Mayen "love triangle" is not the only one we've come across in showbiz; the barely remembered Vic Sotto-Dina Bonnevie-Connie Reyes to the still happening Manny Paquiao-Jinkee Pacquiao-Krista Ranillo are other examples of these.

We are all familiar with the predictably martyr wives, incorrigibly unfaithful husbands (and also wives), and the stereotypical younger, (and usually thinner) mistress.

But the most riveting love triangles are those where the victim and "villain" are unclear; where which person we feel most sympathy for (kawawa naman si____) and most anger towards (grabe naman si ____), is different depending on whom you talk to.

I am not here to point fingers nor make pronouncements about why what ____did is wrong and why ______is not bad, but merely misunderstood. What I would like to do, however, is show how issues that came up among Kris, James, and/or Mayen are the very ones all of us face in our very own relationships.

Many people have already made up their minds about the Kris-James-Mayen triangle. Was it really a "love triangle" or merely a media-driven one? Should Kris stay and give him another chance? And what about James? Should he stay or leave the marriage?

I don't have the answers to the above questions. What I have, however, are some observations that seem relevant in most marriages when a supposed "third party" enters its reality. From these observations, other questions emerge.

Is the woman portrayed as the home wrecker the real issue? Or is she just a scapegoat? Just a symbol of a problem the couple already had and need to thresh out?

The problems couples may already have had are as numerous as the stars.

I am very uncomfortable when inequalities are emphasized from the start. Many relationships may seem unequal from the start. Examples: She's exceptionally beautiful; he looks something that crawled from under a rock. Or he is rich as Rhodes; she is poor as a church mouse.

Upon further analysis however, one realizes that the marriage is one of equals after all! He trades his money for her beauty. Sometimes, one or the other loses when such an agreement is brokered. However, sometimes such relationships not only continue but actually thrive. This happens only when each spouse feels she got the better end of the bargain.

The first glaring inequality in the Yap marriage is the one Kris talked about with Boy Abunda when her visit to Mayen became a media feeding frenzy.

Kris said she is grateful that he married her and gave her his name. I can understand happy, maybe even relieved, but grateful?!!?

I would do exactly as Kris did if I felt grateful to my husband for giving me his name, if I felt from the start that I had more to gain from the marriage than he did. Deep gratitude for implies something you didn't really deserve. If Kris really feels that James' making her his legal wife her is something she never expected but secretly longed for, well, hells bells, no wonder he seems to have a roving eye!

Their age difference is another point of inequality. It doesn't have to be, but if she follows her family's advice it will always be a point of contention. Kris seems constantly reminded by her siblings that, because she is older, she has to be more patient...perhaps overlooking a few of James's mistake.

But Kris will always be older. Does that then mean Kris always has to be patient, the "overlooker," instead of the one whose mistakes are overlooked?

If that, indeed, is the result age gaps bring to a marriage, then I can't see why anyone would marry a younger person. No matter how wide the age gap, constantly forgiving the younger person because you are wiser and more experienced, gets tired after a while. He is your husband, after all, not your child.

Another inequality that seems to exist in the Yap marriage is the one most difficult to talk about. Perhaps its because no one really talks about it openly. There are whispers about how much richer and better known Kris is. Why need to whisper even if it's true (which it is). Money can be earned and fame can be achieved. It may only be a matter of time. After all, James is much younger and less experienced (joke only).

However, there is a supposed inequality in the Yap marriage that could be damaging: that Kris is far more intelligent than James. There are many marriages that work on this principle. Indeed, many marriages work because this belief is how couples prefer to behave.

However, a man's constantly being told (whether verbally or more insidiously) he is less bright than his wife will stop feeling lucky he landed such a good catch. He will start feeling victimized and taken advantage of.

One of the more common ways men equalize their wife's seeming superiority over them is by playing around.

I am not saying all wives should pretend to be stupid. I am not even saying wives should really be less intelligent than their husbands. All I am saying is that, no matter how high your IQ is, your EQ is pretty darn low if you purposely make your husband feel you really are brighter...no matter what your friends or the tabloids say.

In the same interview with Boy Abunda, Kris mentioned a conversation with James where, quoting PEP quoting herself, Kris told James: "Don't provoke me."

Like sex, marriage can get down and dirty. However, the former is much more fun when it is. One reason is that sex is purposely made so between the couple who are both after down and dirty sex. Anyone who starts or ends a discussion with "Don't provoke me" is practically begging to have her husband unfaithful to her.

No, no, no, I am not condoning infidelity, and yes, even when pushed, a man can still refuse to betray his wife. However, refusing becomes a lot easier when he feels he is not being treated like a child. Being warned not to provoke someone is like warning a child not to have a temper tantrum.

Saying "Don't provoke me" to a grown man is telling him you only want to talk about what you've chosen to discuss. It can be anything from "how grateful I am that you treat Josh like your own flesh and blood," to "I love you so much I've refused movie roles which include kissing another man." Seeming compliments, but untrue, and thus demeaning as hell, if you are forced to listen to such claptrap most of the time.

Saying "Don't provoke me" to a grown man is telling him you're not interested in what he feels or thinks. If it is not something you want to hear, then it is not fit for discussion. When it comes to equality in conversation, it is not what nice thing is said to which, but who gets to choose the topic of conversation.

While it would be simplistic to say a sense of fairness/equality is the only quality that matters in a relationship, it is certainly a good start. The others—emotional fidelity, "quality time" etc. can be discussed at some future date.