Shalani Soledad says she has a good relationship with Kris Aquino 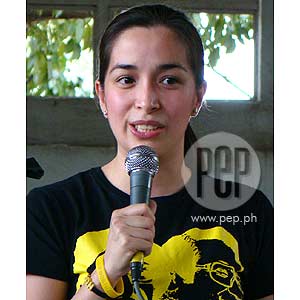 "Kris will always be the sister of Senator Noynoy and Kris will always be a credible endorser," says Valenzuela 2nd district councilor Shalani Soledad about comments that Kris Aquino—youngest sister of her boyfriend and presidential candidate Noynoy Aquino—should be prohibited from endorsing her brother in the coming elections. The criticism came out in the aftermath of Kris's latest marital woes.

For a while, Kris Aquino's request to her brother, presidential candidate Benigno "Noynoy" Aquino III, "to stay single forever" became the talk of the town. (CLICK HERE to read related article.)

Many were surprised by the TV host-actress' comment, since Noynoy already admitted in public his relationship with Valenzuela councilor Shalani Soledad.

The issue died a natural death after this. In fact, Shalani and Kris were seen together in an event late last year to prove that everything's fine between them.

In a short interview with Shalani during an event in Cagayan de Oro City last Sunday, January 17, she told PEP (Philippine Entertainment Portal) and other members of the press that she's now building a good relationship with Kris and with the other sisters of Noynoy—Ballsy Aquino-Cruz, Pinky Aquino-Abellada, and Viel Aquino-Dee.

"Well, of course, as the sister of Noynoy din, siyempre I would want to have a nice relationship [with her]; and a good relationship also, not only with Kris, as well as the other sisters. So, sana doon mapunta ang relationship, maka-build kami ng good relationship," Shalani said after a book-giving event at Barangay Macasandig in Cagayan de Oro City. The said event was part of the regional launch of the electoral campaign group for Senator Noynoy called Ayos Na.

KRIS WILL ALWAYS BE NOYNOY'S SISTER. When asked to comment on the current issue about Kris's married life, Shalani hesitated because she said she doesn't know the whole story. (CLICK HERE to read related article.)

"Tungkol doon sa personal na nangyayari sa kanya, I am not very much aware of the facts, so I cannot comment," the lady councilor politely answered.

However, while many think that Kris's marital problem would have a negative effect on her brother's presidential bid, Shalani says otherwise.

The media also asked Shalani's reaction about comments that the Liberal Party, the political party she and Noynoy belong to, should not get Kris as an endorser anymore.

The lady councilor said it would not be possible.

Councilor Soledad talks more about her full support to the presidential candidacy of Senator Noynoy Aquino in Election Watch, PEP's special microsite for the 2010 elections.