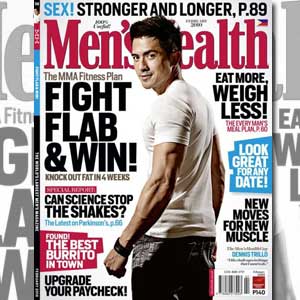 It has been more than two years since Dennis Trillo first graced the cover of Men's Health magazine and it is evident how much the 28-year-old matinee idol has changed. Dennis now sports a leaner physique, with more cuts on his body and a more defined six-pack.

Even his face has changed. He looks more serious, with his slender cheekbones and sharp jaw getting more prominent. His image projects a more mature persona who has seen seen life and all its hardships.

What has happened from then till now?

For the past two years, Dennis Trillo has been working hard, training hard and living a healthier, fuller life. What most people don't know is that the change Trillo underwent, physically and otherwise, was not brought about by a smart career move. It's something deeper and much closer to his heart: "Mas lalo ako napaisip na maging fit and magpa-condition ng katawan after what happened to my mom—she had open-heart surgery last year. So because of that, naisip ko na kailangan ko talaga maging healthy para makaiwas sa sakit, lalo na s'yempre, di na ako bumabata."

While Dennis had been in the habit of exercising even before, his workouts are more serious now. Dennis has even added a Filipino martial art called Yaw-yan or Sayaw ng Kamatayan, which combines kickboxing with ground fighting techniques and weapons such as Arnis,to his workout routine.

Yaw-yan was introduced to him by a cousin, who told him to try the discipline since he was so passionate about MMA. "He told me that I would be able to appreciate watching MMA fights more if I understood all the moves and what the fighters did," he explains. "Hindi lang kasi basta fight ang MMA, it's a sport. It's not just freestyle fighting. I get hyped up every time I watch a UFC event or any UFC match because everything's so unpredictable."

Dennis even bonds with his two-year old son by former beauty queen Carlene Aguilar, Calix Andreas, over MMA and boxing. The night before his Men's Health cover shoot, he was up late horsing around with his son. "He even has gloves!" enthuses the proud Papa. "Mahilig din siya sa fighting. He can throw straight punches—marunong na siya. I'm his punching bag most of the time, although he does have his own punching bag. Magaling na nga, e. Makakaknock-out na 'yan ng ibang bata!"

Learn more about Dennis Trillo's love for Yaw-yan and how you can inject MMA into your workout by grabbing a copy of the February issue of Men's Health Philippines, now available in newsstands, bookstores and supermarkets nationwide for only P140.