Pops and Martin talk about kisses and an intimate backstage moment 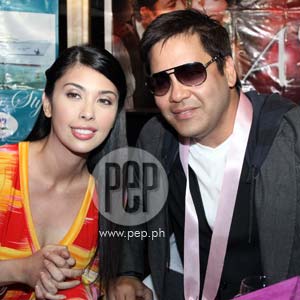 Concert King Martin Nievera (right) said that the friendship between him and ex-wife Pops Fernandez (left) has now reached the point where they can look back on their past without bitterness. The celebrated ex-couple also made fun of a kissing scene they did as part of a VTR for an upcoming concert.

The first kiss between Martin Nievera and Pops Fernandez resembles a scene lifted from a Vic Sotto comedy film.

"Our first kiss was an accident. We didn't really mean to kiss. I didn't mean to go for the lips," Martin recalled vividly during the press conference of his Valentine concert with ex-wife Pops held last February 5 at 7,107 Islands Luxury Ship.

The concert titled One A-More Time will happen on February 14 at the SMX Convention Center in SM Mall of Asia, Pasay City.

Pops, who was seated beside Martin throughout the interview, could not seem to remember.

"Remember when we say goodnight to each other, the usual way we did every night, I turned around and there!" Martin continued, still sounding very proud of the feat which happened several years back.

That kiss would eventually serve as prelude to a married life full of promise at first but unfortunately crumbled after 13 years due to differences that plagued the union until the very end.

REGAINING THE FRIENDSHIP. It took time before genuine friendship would develop between Pops and Martin following the annulment of their marriage in 2000.

The first few years since the separation were understandably bumpy and the possibility of performing together on one stage appeared impossible. But the passage of time has certainly healed past wounds, enabling both parties to start a friendship for the sake of their children and loyal fans.

It was a difficult period, confessed Pops, referring to the separation and its aftermath: "Before, when it was still fresh, when bawat touch was still painful and bawat words masakit, I would pray to God for me to surpass all the pain and sana one day it would all came back to normal."

The Concert Queen added, "It's always nice to have the friendship back especially for us since we have our kids."

"Believe it or not I'm not with anybody. I'm not seeing anybody but I'm happy... I'm spending more time with my family and some of my friends so I'm really enjoying myself," Pops pointed out.

Given her current status, the joke is that Pops has no choice but to date Martin on Valentine's Day.

"Wala din naman siyang choice," Pops replied, "we have to work together."

Martin insisted, too, that he is currently dateless. The Concert King, who is known in the business for singing heartfelt love ballads, mentioned the traits he is looking for in a woman.

"Someone who can tolerate my moods and my quick impulsive ways," he said. "And there was no woman out there like that."

UNFORGETTABLE MOMENT. One of the upcoming concert's highlight is the showing of a special video filmed in Tagaytay.

The video clip reportedly includes a kissing scene between the ex-couple. "The two had no qualms 'locking lips' during the shoot because they knew it is essential to the story," the show's promo write-up noted.

Martin replied when asked to rate Pops as a kisser, "I've never been a kisser and a teller. All I can tell you is that it's not hard for us to kiss. It's automatic for me anyway, even just to hold hands."

As a concert pair, the two have performed together in numerous Valentine concerts that it became virtually impossible for both parties to name a particularly unforgettable moment.

Well, Martin, has one particular incident on top of his head though Pops tried hard to dissuade her ex-hubby from divulging it.

Pops, again, could not seem to recall the moment, prompting Martin to say, "She don't remember."

A blushing but relaxed Pops could only reply with a grin, "That's how great it was."