PEP EXCLUSIVE: Noynoy Aquino says being dragged into Kris' marital problems is "part of the territory" 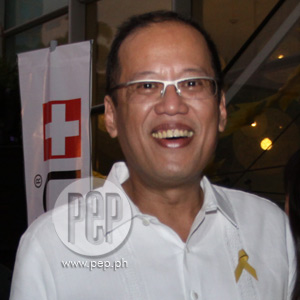 Last Sunday, January 24, Swatch launched 801 sets of commemorative watches in honor of the late Cory Aquino. During this event, Senator Noynoy Aquino (shown above) said that he felt touched by the love given by close family friends.

In celebration of what should have been Corazon "Cory" Aquino's 77th birthday today, January 25, Virgie Ramos of Swatch thought of coming out with a limited-edition watch that would remind people of the "woman dressed in sunshine."

On a fine Sunday afternoon, January 24, members of the Aquino family joined Jaime Zobel de Ayala and Virgie Ramos in unveiling the 24-foot high Cory Commemorative watch. Designed by Jaime Zobel de Ayala, a longtime friend of Mrs. Aquino, the larger-than-life watch has a yellow sun on its clock face. The faces of Cory and Ninoy Aquino were placed on the lower strap of the watch while yellow ribbons were placed on the upper strap of the watch.

For sale to the public are 801 sets containing a hardbound coffeetable book and two Swatch watches. The number 801 refers to August 1—the date of Cory Aquino's death. The book, titled A Woman Dressed in Sunshine, contains photos and stories of her personal and public life.

Cory and Ninoy's youngest daughter, Kris Aquino, was not present during the unveiling, which took place from 3 p.m. to around 6 p.m. in the evening at the Museum Café, Ayala Museum in Makati City. But her siblings Noynoy, Ballsy, Pinky and Viel, as well as the grandchildren of Mrs. Aquino were there to grace the occasion. Mikee Cojuangco, Teddy Boy Locsin, Tessa Prieto-Valdes, and politician Franklin Drilon were among those present that afternoon.

During the program, Martin Nievera performed his original composition titled "Impossible Dreams" and Lea Salonga wowed the crowd with her powerful rendition of "Bayan Ko."

At exactly 5 p.m., the giant yellow watch was shown to the public for the first time amidst a shower of yellow confetti. According to Virgie Ramos, the giant watch would be displayed in front of Ayala Museum for about a month before it is transferred to Greenbelt 5.

CORY & NINOY'S ONLY SON. During the special occasion, PEP (Philippine Entertainment Portal) asked presidential candidate Senator Noynoy how he felt about the tribute being given to his late mother.

"This affects me on so many levels," he admitted. "In effect, what Don Jaime said was that, 'The people who forget the lessons of the past are meant to repeat them.' My mom was called upon to fulfill her duties and it was a very special circumstance in the history of our people... We recollect what that spirit was.

"Secondly, as a son, I'm glad that my mother is being honored in such a manner and by the same people who were there...30 years na pala ang relationship. Sino ba naman ang hindi mata-touch dun?"

Does Noynoy find it hard to step out of the shadow of his parents, Cory and Ninoy Aquino, both of whom are considered heroes of this generation?

"They are my icons, they are the role models, they are the standards. How do you even surpass the standards? If there's any pressure on my part, it's that I can face them at some point in time and be able to say that I did what I could do in fulfillment of their dreams and aspirations for our people. Sa akin, ang importante, I would be able to say, 'Hindi ako umatras sa laban na ito.' I never felt I wanted to compete with them. Kung anong ginawa nila, it was very close to perfection."

ON KRIS'S MARITAL PROBLEMS. How did he react when his name was dragged into the issue of Kris Aquino's recent meeting with Mayen Austria? The latter had been calling James Yap to unburden her problems but Kris, the wife of James, confronted Mayen to say that she was uncomfortable with her actions. (CLICK HERE to read related article.)

Noynoy said that he was not surprised when his name was dragged into the domestic problems of the couple.

What advice did he give to his youngest sister?