Daiana Menezes on DJ Shivaker: "He's the closest friend that I have right now." 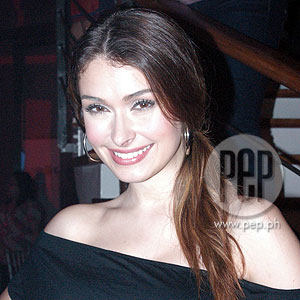 "No, we're not together," says the Brazilian beauty. "Ganun lang, as in tuksu-tukso lang... We hang out, we go out a lot, we're really close, we go everywhere, we talk a lot."

"Yeah! Oo, ganun lang, as in tuksu-tukso lang... I'll clear that, ha? Ganito. Hindi naman kami ni Shivaker. Yeah, we hang out, we go out a lot, we're really close, we go everywhere, we talk a lot... He's the closest friend that I have right now in my life.

"Maybe, who knows, it can turn out into a relationship but I'm not looking for a relationship right now kasi I just broke up, di ba? And when I broke up with Carlo [Guevarra], it's not because of anybody else."

"It's just that we have a difference in age. Di ba, I'm [two years] older than him... So I think after a while I realized that we have different perspective in life, iba ang tingin namin sa buhay...

"That's the reason why I broke up with him. I was just waiting for the right time talaga, para hindi rin naman masaktan yung tao."

"Maybe I just gave him the advice that I think that he should take... I also told him na 'You have to look for the best for you. If it's not working sa kabila why don't you try something new?'"

"Ganito yun. I got the number... I didn't talk to him na, 'Perry can you get Carlo?' I just got his number from a friend of mine and I told Carlo, 'Oh, kausapin mo ito kasi ito ang magaling na manager dito sa GMA for guys.'

"I just suggested to him, then he asked me 'What should I say?' and I told him what to say, so ganun.