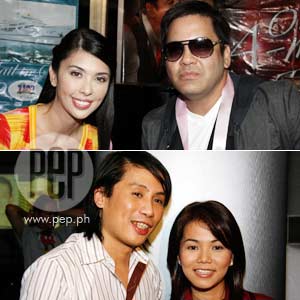 The concert featuring ex-couple Martin Nievera and Pops Fernandez is just one of the many live shows happening throughout the weekend in celebration of Valentine's Day.

Aside from the chocolates, roses and candlelight dinners, Valentine's Day is the perfect occasion to celebrate good live music.

With Heart's Day falling on a weekend, artists and producers are more than happy to lend their talents and resources for lovers everywhere who wouldn't mind spending extra cash to be with their special someone.

PEP (Philippine Entertainment Portal) lists down some of the concerts happening around the metro during this Valentine weekend:

Romance will be up on the air starting on Friday, February 12, as Randy Santiago, Gino Padilla, Raymond Lauchengco, Louie Heredia, and Nikki Bacolod reminisce past hits from the new wave era with Men of the '80s,a concert at the Tejeros Grand Ballroom, Island Cove Resort and Leisure Park.

It will be a ballad feast at the Araneta Coliseum as Side A, Nina, and Freestyle treat lovers to a string of popular romantic tunes via Love 2 Love 2 Love.

Get to know MYMP's new vocalist, Juliet Bahala, and sing with her as well as the popular group known for acoustic covers unveils their new lineup at the Music Museum through a coming out show titled MYMP Now: Prouder Than Ever.

Expect to hear your favorite foreign ballads as John Ford Coley and David Pomeranz team up to deliver their signature hits like "Just Tell Me You Love Me," "It's Sad To Belong," "Old Song," "Got To Believe In Magic," and many more, at the Hyatt Hotel & Casino, in a show billed Timeless Love.

Expect nothing by soothing stripped down numbers from Paolo Santos and Sabrina as they perform together at Ratsky, Tomas Morato, Quezon City, in an intimate show titled, Reminiscing Acoustic.

Go Madz About Love as the Philippine Madrigal Singers invade the Meralco Theater in a fund-raising concert for the benefit of Project Brave Kids and Kalinangan Youth Foundation Inc.

Double up the romance on February 14, Valentine's Day, as the Concert King Martin Nievera and Concert Queen Pops Fernandez continue their tradition of spreading love through music, this time with One A-More Time at the SMX Convention Center in Pasay City.

There will be a Sibling Revelry between Raymond Lauchengco and Menchu Lauchengco as the two take turns in dishing out the standards, ballads and Broadway to West End staples at The Rockwell Tent in Makati City.

Kuh Ledesma will team up with singing actors Christopher de Leon and Jomari Yllana as they profess Forever Love at the Captain's Bar of Mandarin Oriental Hotel in Makati City.

Filipino pride Charice Pempengco will belt out ballads and hits alongside Eric Santos, George Yang and Ogie Alcasid at the PICC Plenary Hall in a concert simply dubbed Charice in Concert.