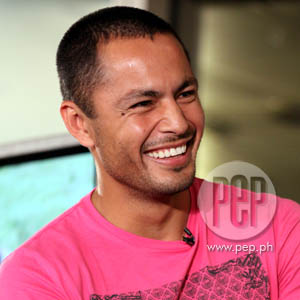 "I'm a competitive guy. So when I get out there, I play to win," explains Derek Ramsay about keeping his active lifestyle despite his knee injury.

Derek Ramsay is known for his passion for sports, be it Frisbee or football. This year, though, the actor may have to set aside his sports for a while to avoid further damage to his knee injury.

"The sports, I'm kinda giving that up for a while because I have to take care of my health. I finally realized na hindi ako si Superman. Bumibigay na itong mga tuhod ko, so ipapaayos ko na lang muna," the 30-year-old hunk actor told PEP (Philippine Entertainment Portal) and other members of the media at his solo press conference for Habang May Buhay held recently.

Derek said that he would finally submit himself to knee surgery by the end of February or first week of March.

Derek also said that he could endure the pain and the blood, but never the thought that he would be confined.

"I don't know why," he said. "Every time pumupunta ako sa ospital, feeling ko paglabas ko, mas may sakit pa 'ko, e. I'm not scared of needles. I'm just scared of the fact that they're gonna cut me open. Hindi naman ako takot sa dugo. Pero ang dami kong scars on my body. Just the mere fact na nasa ospital ako, I have to be confined, I have to stay there. I have to come in and out,people come in and out. I feel like I'm helpless."

What kind of surgery does Derek need?

"My ACL is torn, so my knee is popping out of its socket. So I have a miniscule there which is like shock-absorber for the bones. And then, they're gonna put it together. Putol na yun. 'Yon, okay lang yun. They can operate that right away. Pero yung main concern niya, may fracture ako sa upper part of the knee that's pinching a nerve. At kung na-pinch yung nerve na yun, hindi ko na [mahutuk] yung paa ko. So they... I forgot what they call it, crab-leg walk daw. Maglalakad ako ng [hindi ma-bend ang leg joints]. So, that's why ngayon, di ko na talaga nilalaro. E, kung ma-pinch talaga yung nerve na yun," he explained.

Aside from his father who has been advising him to do the surgery, Derek's girlfriend, Angelica Panganiban, is also happy about his decision.

"I guess she's excited," Derek told the media. "Kasi yung surgery naman nowadays is not as serious as it was before."

He is also confident that he would get through the surgery easily. Derek said, "Dati ganyan kahaba [needles]. Now, [maiksi] na lang. They get the ligaments from here or here, 'tapos lilipat lang nila. Yun nga lang yung mahirap sa knee surgery is that you have... kasi you lose some muscles. 'Yon naman alam ko, with who I am, I can. I'm disciplined enough to rehab my leg. Yung ano lang, yung fact na they're gonna cut me open."

In the end, Derek left a message to those who ignore simple body injuries:

"Kung may injury kayo, get it checked. Get it checked. Be smart about it. I know it's hard to just sit down and just watch it. Trust me, it's better in the long run.

"Don't be like me na, laro nang laro kahit na in pain. Painkillers don't do your injuries any good, e. Nawawala nga yung sakit pero you're worsening your injury. So ako, uminom ako ng painkiller, feeling ko okay na ako. It's just, you don't feel your pain and injury is getting worse and worse. So if you have something, get it checked."

Despite his injury, Derek will still be running in Century Tuna Super Bods 2010 on February 21 at The Fort Global City in Taguig City.

"That's a responsibility that I cannot back out from," he said. "I have to run, I think, five kilometers. Okay lang naman ako dun sa straight line, e. Pero pag move left and right, baka bumigay yung tuhod ko. I wanted to run 21 kilometers, but they convinced me to run na lang five kilometers."