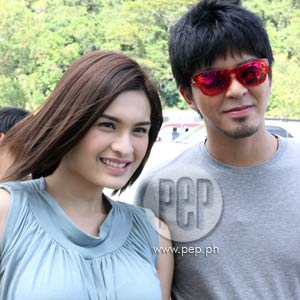 Ikaw Sana, GMA-7's early primetime offering is being topbilled by StarStruck loveteam and ex-couple Mark Herras and Jennylyn Mercado, together with Pauleen Luna in her first-ever major kontrabida role.

Pauleen shares the same sentiments of happiness and sadness now that they are down to only one taping day for Ikaw Sana.

He even nodded in agreement when some members of the press mentioned something about the kids admitting they will miss early wrap-ups of the set.

On a serious note, Direk Joel told the press how he can vouch for the improvement of the younger stars' acting skills in Ikaw Sana, particularly Mark, Jennylyn, and Pauleen.

"Good actors, good attitude, all of them... Jennylyn has matured into a very good actress, so as Pauleen," Direk Joel said.

He later expressed this as one of the reasons he chose Pauleen and Jennylyn to be part of his independent film entry Sigwa in the 6th Cinemalaya Independent Film Festival.

HAPPY OR SAD ENDING? Kapuso fans are surely excited and at the same time sad as Ikaw Sana nears its ending. But what's in store for the viewers in the last week of Ikaw Sana?

Catch the last five episodes of Ikaw Sana this February 1 to 5 at GMA Telebabad before 24 Oras.