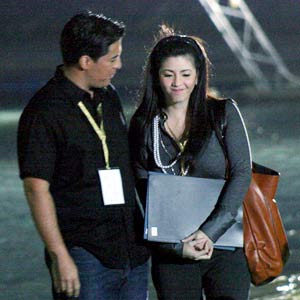 Aga Muhlach and Regine Velasquez team up once again to make hearts flutter this year via Of All The Things. Showbiz Central's John "Sweet" Lapus gets the latest from the film's lead stars.

Award-winning actor Aga Mulach and multi-talented singer Regine Velasquez reunite in the upcoming film Of All The Things, set to be released this summer. This is Aga and Regine's third outing, the first time being Dahil May Isang Ikaw in 1998 and Pangako... Ikaw Lang three years after.

Sweet commented, "So may mga flaws kayo pareho, but together sumaswak kayo."

"Para maayos namin ang isa't isa," agreed Aga, "para we bring out the best in us."

The Regine-Aga tandem clicked in all their films and the singer said that she herself gushed when she watched the last two films. "May kakaiba kaming chemistry pag magkasama kami. Ako, kahit pinapanood ko ang movie namin, kinikilig ako!"

"Okay na ako ngayon," smiled Regine. "I'll be back soon. I'm also just finishing my film kasi right now, halos every day kami nagsu-shoot. So the only best [day] na puwede makita family ko is Sunday, so I am taking that opportunity to see them."

Regine will also have another primetime series on GMA-7, Diva, which will pair her anew with Ako si Kim Samsoon leading man Mark Anthony Fernandez.