PEP EXCLUSIVE: PART II Marlene Aguilar: "What they don't understand is that the boy's a genius." 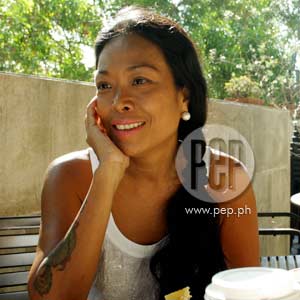 On January 18, the National Bureau of Investigation (NBI) arrested Jason Aguilar Ivler, a former U.S. marine suspected to have gunned to death the son of a Malacañang official last November.

The media has uncovered Jason's ties to Philippine showbiz. It was revealed that Jason is a rapper, and an actor, appearing alongside Dingdong Dantes, Polo Ravales, Sunshine Dizon, and other stars in the former teen-oriented drama show TGIS.

The media has also portrayed Jason as a "spoiled child," and a "criminal." But what it does not understand about Jason, Marlene claimed, is that "the boy's a genius."

"Jason understands quantum physics more than anyone I know. I know some physicists. Ang talino kasi niya, e. Akala ng mga tao, there's this dude na rapper, na guwapo, but they don't understand the mind of Jason. He graduated top of his class in the States," she told PEP in our interview

Marlene also denied that Jason is "spoiled." She said Jason is a "working student."

Her 28-year old son, she added, is "not crazy." The Filipino people is just "dumb" to "misjudge and misunderstand" Jason, she said.

"The only people who can vouch for who Jason are the few people lucky enough to get to know him. They don't know what Jason and I are fighting for," she told PEP. "The thing is most of mankind are dumb so every time they don't understand somebody's mind because it's beyond their understanding, they say that the person's crazy."

JASON IN SCHOOL. Marlene said her sons Jason and Colby, 24 years old, did not do well early on in school because they are "geniuses."

But both boys excelled college. Marlene said Jason finished his psychology major at the Hawaii Pacific University. Colby, meanwhile, is studying cinematography in the U.S.

Marlene said Jason is fascinated with the minds of "criminals and serial killers."

"Jason is fascinated by minds. He studied the most popular crimes in the world. He would study the minds of Bin Laden, of Stalin, di ba yung mga baliw? Serial killers in the States," she said.

OBSESSIVE-COMPULSIVE. But if Jason had any "abnormality" it would be his fixation on neatness and order. Marlene said her son is afflicted with Obsessive-Compulsive Disorder, an anxiety disorder that the World Health Organization's ICD-10 says has the "essential feature of recurrent obsession thoughts or compulsive acts."

According to Marlene, Jason as a child would be upset if anybody put his toys in disarray.

At the age of six, Jason forbade the maids from entering his room.

Jason carried this affliction up to adulthood.

Abnormal brain development had been tagged as the cause of OCD. There is no known cure for the condition. As time goes on, many sufferers learn to hide their compulsions and obsessions due to shame.

A GOOD FRIEND. PEP contacted Jason's close friends to ask about his personality. The general consensus is that Jason is a "good friend." None of the four persons we talked to confirmed Jason's OCD, or his violent childhood, or his being a "warrior of heaven."

According to someone who has been Jason's close friend for more than six years and asked not to be named, the rapper and former U.S. marine is a "quiet type of person."

"He don't drink that much, he don't smoke, wants to meet a lot of new friends because he came from a boot camp, he hates girls who send quotes messages and wanna be free on this Earth," he said.