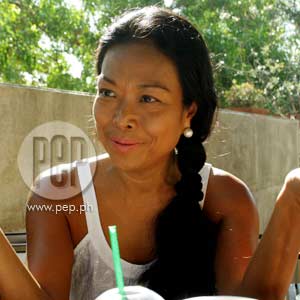 During the interview last Friday, January 29, Marlene was exchanging text messages with one of the members of her son's fan club in Facebook. Later in the day, parts of Marlene's answers to the interview were posted on the fan club's wall.

Before the alleged murder of Victor Ebarle Jr, Jason Ivler was involved in another incident back in 2004.

Ivler, who came back to the Philippines during a break period in college, was driving his Toyota Land Cruiser when he rammed into an Isuzu Trooper, killing its driver, Undersecretary for Resettlement Nestor Ponce Jr.

Jason was charged with reckless imprudence resulting in homicide for Ponce's death. He posted bail, but was eventually caught in Zamboanga City while trying to catch a ferry bound for Malaysia. The Bureau of Immigration then issued an order preventing Jason from leaving the country.

But he was able to return to the U.S. The fugitive eventually joined the military in 2007, despite a warrant for his arrest pending in the Philippines. The NBI only knew that Jason was in the country when he was exposed as the Ebarle Jr's alleged killer.

Besides, Marlene said Ponce's death was not Jason's fault because it was "an accident."

"Of course! It was an accident. This is what's stupid of the masses, they call that murder. It's not murder. A car accident is a car accident, no matter how it is. Kahit ano pang, how it happened. No matter what explanation," she said.

CHANGES FROM WAR. Marlene was less responsive when PEP inquired about Jason's career in the military, and his eventual "honorable discharge."

In various interviews, Marlene said that before her son was discharged, he was detained and "forced to admit things" about his family.

But Marlene admitted that she felt there were "changes" in Jason when she returned home from the Iraq war. In this part of the interview, Marlene gave her answers in pieces.

"He didn't come back right away, he was in the States for a while. Of course he's changed, you know? If you read the post-traumatic stress disorder... they're saying that... he lost a lot of innocence," she said.

Was he still the same Jason?

And were there concrete changes that you know about?

Were there changes you could not discuss?

But why did he join the military?

FAN CLUB. But one good thing came out of Jason's arrest—supporters of the "warriors of heaven" are increasing, Marlene said.

She proudly pointed out that the members of Jason's fan club in Facebook are steadily increasing. As of press time, the fan page has recruited more than 15,000 supporters.

PEP tried to ask members of the fan club for interviews last Friday, but the top members had agreed not to talk to the media. The moderator of its exclusive chat page, for instance, had sought to ban media from the site, citing the need to "protect" their "Tita Marlene."

Top members of the fan club are increasingly anti-establishment. Posts in the Facebook fan page vary from blind adoration to Jason's "good looks," criticism of the media's portrayal of Jason, get well wishes, T-shirt designs, and messages from haters.

Marlene is in constant communication with the senior members of the page. Marlene thinks the youth members of this Facebook page will become a "big force" that can bring the "new world."

"Yun yung power ng fan club. They are underestimating the power of Jason's fan club. It's like Jason's tragedy had to happen to unite you guys," she said.

This way, Jason's case has inspired a higher level.

"It's not really about me or my son anymore, it's really... You have to look at it in a bigger picture," she said.

The support she's getting from Facebook users, Marlene said, inspires her to continue her fight for a better Philippines. A part of her, however, wants to quit if she loses her son. She said she will then doubt if she can continue what the Buddhist oracle has predicted for her.

"I will play this theater. This is a theater. You know, di ko kaya. Mamatay na lang ako. If I lose my son, I'm going away to live a quiet life," Marlene concluded.