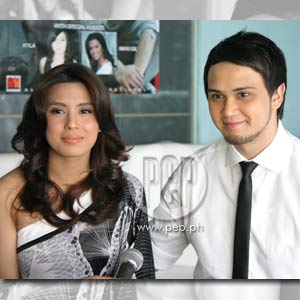 "The kilig moments are not to be planned. You just gotta go with the flow." – Billy Crawford

"It's kinda difficult because we start really with our taping. In fairness to him, he's always on time. I gotta give him that. We're both just punctual and very professional with what we do," sabi ni Billy sa interbyu last week na naganap sa The Lounge, Tomas Morato sa Quezon City.

Aminado si Billy na isang magiging mahabang proseso ang naturang show, "We're going day by day. You know, one step at a time. Our job is really that simple in Pilipinas Got Talent. We're not judging anyone but we have side comments on the backstage. That's all we do.

"It's two different things. The similarity between hosting and singing is that you're really playing a character. As a singer, you're singing from the heart. You have to be as real as possible. It's the same thing with hosting, you just have to talk to the people. You just have to be natural.

He added, "Luis is a great host. Nikki is a wonderful host. I grew up watching Martin Nievera in MAD (Martin After Dark). I grew up watching that. I grew up in hosting as well. Just be yourself and not overdoing it. The energy has to be up but not that exaggerated. You gotta calm down some time and just be natural."

"Hopefully, we'll be together. We're already working together that day. Hindi pa naman kami nagsasawa. We're just gonna actually have a good time. I really just wanna join her family coz I really don't have my family over here," ani Billy.

Sabi naman ni Nikki, "It's a different Valentine's Day for us because we will be performing. Hopefully, we'll have dinner after the show."

"We love going out and exploring all kinds of food," sabi ni Billy.

"We have more to learn. I think time will be able to secure the relationship. The trust, the compatibility and being comfortable around each other's family, I think we got that covered.

Dagdag ni Billy, "We're both young. And let us concentrate and work on our craft. It will come."