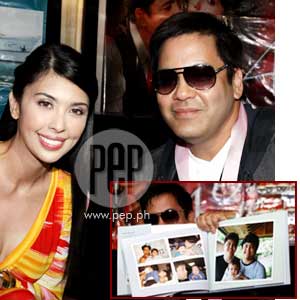 To remind her former husband what the best things in life are, Pops gifted Martin with an album of never-before-seen snapshots of him and his sons Robin, Ram and Santino. The amicable exes continue to spread the love with their annual Valentine concert, performing together anew on February 14 at the SMX Convention Center in Pasay City in a concert billed One A-More Time.

Turning 48 years old last Friday, February 5, Martin received from Pops a splendid custom-made photo album documenting some of his special moments with sons Ram, Robin and Santino. The collection, painstakingly compiled by Pops herself, shows the Concert King as a loving father (a side of him rarely seen by the public) through a series of candid snapshots and intimate photos.

Martin proudly displayed the images to members of the entertainment press along with a few invited guests last week during the press conference for his Valentine concert with Pops titled One A-More Time, scheduled on February 14 at the SMX Convention Center at the SM Mall of Asia in Pasay City.

The press conference was held at the 7,107 Islands Luxury Ship, which at the time of the event was stationed at Pier 6 of the Manila North Harbor. A surprise party was given to Martin after the official press engagement.

"You work too hard and I don't know what else it is that you want," Pops told Martin. "But really, you kind of had everything already so take it slow, enjoy life and the people who love you, and appreciate things more."

UNSEEN PHOTOS. Most of the photographs chosen for the album had never before been seen by Martin himself, who received the gift in advance of his actual birthday.

"My three sons and myself and pictures of us which I have not seen. It's such a beautiful gift and it's a book, it's an actual book and she wrote some things on it, too, which is very rare for me to see the writings of Pops," Martin affectionately said, while simultaneously leafing through the pages of the album curiously titled "Three Men and A Baby."

Pops, of course, has total access when it comes to photos and images of their sons, Ram and Robin. The challenge for her was to obtain pictures of Santino-Martin's son with girlfriend, Katrina Ojeda. To solve the problem, the Concert Queen solicited the help of common friends who might have stored images of Santino and Martin.

"What do you give somebody who almost has everything?" Pops recalled asking herself during the time she was thinking of a gift for Martin.

"I wanted to touch his heart and I wanted to go more on the senti side, the emotional side."

Pops was not around when Martin received the gift. Martin, who dubbed the present as a "labor of love," confessed to feeling overwhelmed while browsing through the pages of the album for the first time.

"Did you cry when you saw it?" Pops asked Martin during the press conference. "Yes," Martin replied instantly.

"Are there tears in your eyes or baka tear lang?" Pops beamingly inquired. "Three tears," joked Martin in typical fashion.

But Pops knew better, revealing to everyone inside the venue another little known fact about her former husband: "Martin's iyakin especially when it comes to these things."