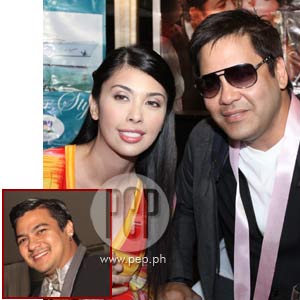 The communication line between Pops Fernandez (left) and ex-flame Jomari Yllana (inset) is once again open barely a year since their bitter breakup. Pops' former husband, Martin Nievera (right), also insists that there's no tension between him and Jom.

What difference a year makes for singer Pops Fernandez.

Almost a year to the day, the Concert Queen's then boyfriend, actor Jomari Yllana, was busy promoting her reunion pre-Valentine concert with ex-husband Martin Nievera. The show dubbed Missing You was Jomari's maiden venture into the world of concert production through Fearless Productions, Inc.-a company he formed together with good friend Congressman Ronald Singson.

Promotional efforts invested to endorse the project went smoothly at first. Pops, Martin and Jomari even took turns exchanging kind words with each other despite the seemingly odd situation, given the personal circumstances connecting the three.

After the concert, however, all the initial praises were replaced by animosity and a "word war" between Nievera and Yllana. Pops and Jomari's three-year relationship also crumbled following the show's staging.

It was said that Martin, a tested veteran of the local live scene, was unhappy with the concert's outcome and was allegedly pointing the blame at the producers. He was reportedly heard saying that he would no longer work with Jomari in the future.

Martin later claimed that his anger at Yllana was only a direct response to the way the latter treated his ex-wife following the breakup.

"So to the people of Fearless, please forgive [me] if you think that I don't want to work with you ever again. What I meant was I can't work with Jomari if he is going to be in a relationship with Pops. I wish them luck [and] if they need me for a show again, I would gladly work with them, but definitely not with Jomari," Martin clarified in a file interview with ABS-CBN.

WATER UNDER THE BRIDGE. In a press conference held last Friday, February 5, to promote Pops and Martin's upcoming Valentine concert, One A-More Time, on February 14 at the SMX Convention Center in Pasay City, both acknowledged that all of them have already moved on from the incident.

"Wala kaming issue," Martin quickly clarified. "First, we've never gone out together and he's never broken my heart and he didn't steal Pops from me. I mean, whoever Pops is happy with, I'm happy with. Whoever Pops is sad with, I will also be sad with. So when she was sad with Jom, so was I. When she was mad with someone, I'm mad at that person too."

The Concert King also mentioned that he fully supports his ex-wife's desire to make peace with the actor-turned-producer.

"I'm all for it," stated Martin, "whatever makes Pops happy, makes me happy."