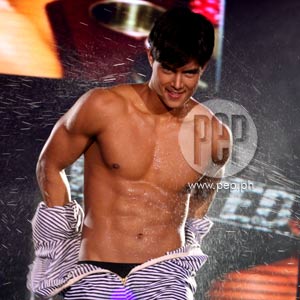 "I'm just a special guest in the show. The show is Kris and Aljur's. They look so good together," said the Japanese-Brazilianhead-turner.

GREAT TIME. "I never thought I would enjoy playing a werewolf in The Last Prince. It was really a big challenge for me, acting-wise, because this is something new to me and I have to give it my best because this is my first time acting.

"I like to thank my co-stars in the The Last Prince, especially Kris Bernal, Aljur Abrenica, Jenny Miller [who plays a lady werewolf], our director and the staff who really took care of us during the shoot of the big scenes."

"The thing that they put on my body and face is sort of itchy at first. But I got used to it as it stayed longer on my body. There was one taping day that I had the makeup and prosthetics the whole day, starting morning until late at night.

"But I don't complain because I enjoy playing a werewolf. On the set, they don't call me a big, bad wolf. They call me a big, hot wolf!" sabay tawa ni Daniel.

"That is very amusing news for me. People must enjoy this because they like our characters in The Last Prince. They must think that it's real, right?

"But I like to say that Kris is such a nice and beautiful girl. She's such a big help to me when I was just starting in the show. With Aljur, he's okay, too. He's a very good actor and he has so many people supporting him and Kris.

"I want to tell their fans that I'm not here to be in the way of their love team. I'm just a special guest in the show. The show is Kris and Aljur's. They look so good together."

"After the TV show, I already have a movie done. I still want to continue acting. It's a fun job. It's also like doing commercials, but acting on TV and in the movies is bigger. I want to experience all that and I hope many people will appreciate what I'm into now."