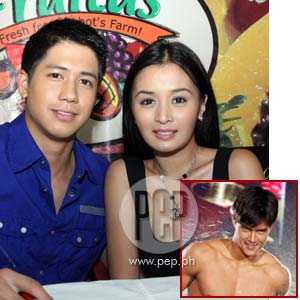 The chemistry between young stars Kris Bernal and Aljur Abrenica had fans swooning over their sweet moments on camera, especially in their latest fantaserye on GMA-7, The Last Prince.

Their rising popularity, however, becomes a huge magnet for controversy that would from time to time test their relationship. But Kris and Aljur, or Alkris to their fans, stand their ground and face the rumors being thrown at them.

The latest issue to hit their onscreen partnership comes from the most unlikely place: The Last Prince cast.

THE HUNKY WEREWOLF. The fantaserye recently added Brazilian-Japanese model Daniel Matsunaga to the cast as a prince who turns into a werewolf. With his striking good looks, Daniel is starting to gain his own admirers, including Kris Bernal. Now, rumor has it that Kris and Daniel are starting to get comfortable with each other off-screen and that Aljur supposedly feels threatened by Daniel's presence on the set.

In Showbiz Central yesterday, February 7, Kris and Aljur showed up to answer the issues in connection with Daniel's rumored admiration for Kris. Pia Guanio did the live interview with them.

What exactly were their initial reactions when Daniel joined the cast of The Last Prince?

How about the news that Daniel and Kris are getting closer? Before the young pair answered, SC showed a taped interview of Daniel praising Kris profusely.

"Kris surely helped me a lot," Daniel said. "It was my first time. I was really nervous about everything, about what's going on. I did not know what was gonna happen. To watch and to talk also. She was a really nice girl and she was like teaching me and helping me with the lines and acting also. We do the same stuff and go to the same tent. She is very sweet and a very cute girl, also very nice person. Yeah, she helped me a lot so I have to thank her."

So, how does it feel now that Aljur no longer has Kris's undivided attention? Is it 50-50 attention?

DANIEL ASKING KRIS OUT ON A DATE? Aljur's tale about giving Kris and Daniel some space just got deeper since Daniel expressed his desire to get to know Kris better. Once again, the tape rolled at the SC studio and Aljur had to look at the smiling Daniel on screen again.

"We are getting close every time we do tapings," said Daniel about Kris. "Our friendship gets better. Every time we know more about each other, gusto ko... Sobra, she's very ganda and cute, right? Anybody who knows her will say the same things. She's a very nice person.

"I think to win her is quite hard," added Daniel. "She is very different. To attract her, I'll ask her for dinner, bring her flowers, and ask her about herself and her family."

Kris, on the other hand, expressed her respect for Aljur when asked if she would agree to go out with Daniel. "Magpapaalam muna ako kay Aljur," she said.

Will Aljur give his consent?

What if Daniel falls for Kris?

Does Kris think that she would ever fall in love with Daniel?

"Kris, it was a pleasure to work with you and Aljur," Daniel said. "I really am thankful for what you guys did for me. You are very cute and thank you very much. I hope there are more opportunites for me to work with you guys. Mahal kita!"

If Daniel really courted Kris, will Aljur fight for her heart?