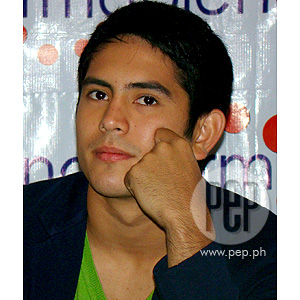 As Gerald Anderson turns 21 on Sunday, March 7, he wants to get more serious in his showbiz career.

The former Pinoy Big Brother teen housemate admitted that when he joined the famous reality search, he didn't think of becoming a big celebrity.

This Fil-Am actor had his first taste of show business when he was 14 years old. He was then living in General Santos City when Star Circle Quest alumnus Joross Gamboa saw his potential to become a celebrity.

In an article written in YES! magazine this month, Gerald related how he was offered to be part of the Fab Boys-a dance group that performed with Joross in his out-of-town shows, and then landed in Kuya's house for the first Pinoy Big Brother teen edition. (CLICK HERE to read related article)

TAKING IT SERIOUSLY. After his stint at Big Brother's house, Gerald immediately got acting offers for TV. Most of the shows he did were youth-oriented programs like Love Spell, Your Song and Gokada Go. He also had his first movie, First Day High, with another PBB housemate Kim Chiu in the same year they got out of Kuya's house.

His luck continued in the years that followed. People have noticed that as Gerald stays longer in the industry, his skill in acting continues to improve. This was very evident in his previous TV series, Tayong Dalawa (2009).

Four years after PBB, the former backup dancer would realize that he has to take care of his image and be more serious about his work.

The young Kapamilya actor said this realization came when his teleserye with Kim, My Girl (2008) received a good response from its audience.

Aside from the primetime series Kung Tayo'y Magkakalayo, Gerald is set to star in an ABS-CBN mini series.

ON PARTNERSHIP WITH KIM. Gerald never denied that part of the reasons for his success was his team up with Kim Chiu. Since PBB, these two young celebrities have gained a solid fan base, which helped them become the popular love team of this generation.

Without disregarding this fact, Gerald thinks that he can also do well in his career if he will be paired with other female celebrities.

If ever, does he already have a celebrity in mind with whom he likes to work with?

ON WINNING AN AWARD. Although his talent in acting is already showing up, Gerald says winning an acting award does not cross his mind yet. Doing his job right is still his main goal in every project he does.

"It's still not the right time," says the Anak TV Seal Most Admired Male TV Personality.

This new matinee idol thinks that for all he has done in industry, he still doesn't deserve critics' acclaim.

For his birthday, he wishes to have a longer career in showbiz. "Sana tuluy-tuloy. Siyempre, hindi natin alam. Pero, I think, 'yong pagiging masipag, pagiging matiyaga, hard-working, I think it will get me there," he ended.