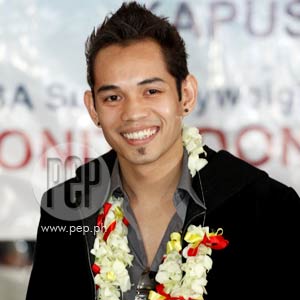 "We're looking at our schedule. We're actually discussing our schedule today, baka next week or in two weeks. Basta I want to do that, that's my main priority to help Gorres in my own way," Nonito told PEP (Philippine Entertainment Portal) earlier today, February 19, after the press conference tendered for him by GMA-7 management at the Executive Lounge of the network's main building in Quezon City.

CONTRASTING FATE. While Donaire's latest ring accomplishment highlighted everything that is good—money, prestige, and fame—the fate met by fellow warrior Z Gorres exposes anew the cruelty of the boxing sport.

Gorres underwent brain surgery for subdural hematoma last November 13, 2009 minutes after his undercard fight with Colombian Luis Melendez at the Mandalay Bay Hotel in Las Vegas Nevada, U.S.A. The up-and-coming Filipino boxer won the grueling contest in the 10th round.

Michael Aldeguer, Gorres's manager, recalled that his ward was still able to proudly prance around the ring while carrying the Philippine flag before suddenly collapsing. He was rushed out of the building on a stretcher and immediately brought to the University Medical Center (UMC).

Subdural hematoma is medically defined as a form of traumatic brain injury in which blood gathers within the outside covering of the brain. Reports said that Gorres's surgeon had to remove a part of his skull to alleviate the swelling.

Gorres remained in critical condition for weeks and months before he was allowed to finally return home in Cebu. He arrived at the Ninoy Aquino International Airport (NAIA) Terminal 2 last February 16, accompanied by his wife, a physician and Aldeguer.

Doctors called Gorres's recovery a "miracle." Unfortunately, the chances of Gorres—who is currently under physical rehabilitation, which is expected to take years—stepping inside the ring to fight again are highly remote given the gravity of his condition.

Donaire has donated to Gorres part of his purse money earned from his latest bout. But aside from monetary assistance, the champion boxer wants to meet up with the Cebu native to offer emotional support.

Nonito plans to sit down with Gorres, "probably invite him out for dinner," so that they could talk thoroughly. An intimate meeting would also help Donaire determine what else the Filipino boxing community could do to further assist their fallen comrade.

PEP asked Nonito what he felt about criticisms that the government lacks sincere initiative when it comes to athletes who are in dire need of assistance.

"There's always a lack of things because hindi pa talaga na-establish 'yong ganun. Even in the States, it lacks support for fighters kagaya ni Gorres, and they're putting a movement together to help victims of situations like that. So, dapat dito, we learned from that and sana mabigyan natin ng suporta," Nonito replied.

"What we can do and what I can do is to inspire people or to make them feel that the movement is honorable and is worth it. 'Yon lang talaga magagawa ko, maybe we'll be able to create something in the near future that we can build on. Pero now, all I can do is assist and help Gorres in ways that I can and for others, sana matulungan din siya."