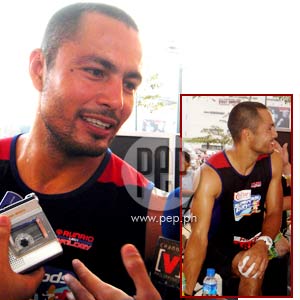 No pain, no gain: Model-actor Derek Ramsay applies ice to his newly operated right knee. Derek made good on his promise to join Century Tuna's Superbods Run, which was held yesterday, February 21.

Derek Ramsay's competitive nature got the better of him yesterday morning, February 21, as he participated in Century Tuna's Superbods Run held at the Bonifacio Global City in Taguig City.

The huge number of people who joined the event thrilled Derek no end that he completely abandoned all precautionary measures needed for his recently operated right knee. Derek's total covered distance was 10 kilometers instead of his original plan to do only half.

"Actually, Century [Tuna] allowed me to do only three [but] I ended up doing ten because I got lost," Derek beamingly told PEP (Philippine Entertainment Portal).

All that adrenalin pushed the hunky actor to sprint though he confessed feeling some pain coming from his right knee, which was operated just ten days ago, midway through the competition. In fact, PEP caught Derek applying ice to his swollen knee inside the media tent after the race.

Initially, Derek intended to undergo an operation after the event but changed his mind, which was against his doctor's advice.

"Parang bibigay," was how Derek described his right knee during the race. "I can feel that my knee is very weak."

TIME TO HEAL. Derek's decision to participate in the event was not to his doctor's liking. The Habang May Buhay actor is not offering any excuses saying that he takes full responsibility for his actions.

"I've got to be smart on this one," said Derek. "Because bale wala lang 'yong operation if I don't follow the doctor's advise."

Even Derek's girlfriend, actress Angelica Panganiban, was not impressed by her boyfriend's decision to proceed with the activity in spite of his fragile knee.

"Well, first she cried because she was so happy that I got the surgery done. Now, she's mad because I still run," he confided.

The hunky model-actor now plans to slow it down without taking a leave from his showbiz commitments. Thanks largely to Derek's fit condition, his surgeon expects the actor to recuperate in no time provided that he follows medical orders dutifully.

Full recovery as estimated by his doctor ranges from "two to three weeks," with Derek optimistically adding, "If I'm religious with my rehab, I'll be okay."