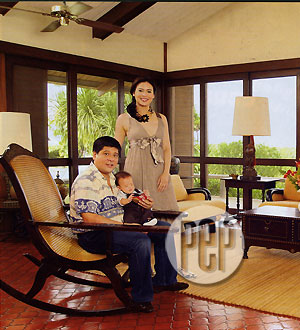 Dawn, Anton, and Jacobo, six months old at the time of this shoot, pose for the August 2006 issue of YES! magazine. The couple look nout on the 9,000-hectare Floirendo property in Panabu district, Davao del norte. The area, known to the locals as Tadeco, or Tagum Agricultural Development Corporation, used to be a swampland. On Dawn: dress, Zara; metallic black shoes, Solea; necklace, Jeux. On Anton: all his own On Jacobo: brown overalls with blue shirt,

On her seventh month of her pregnancy, Dawn gave birth prematurely by cesarian section. When she was rushed to Makati Medical Center, her husband was in Davao, panicking.

"When she got there, akala namin okey-okey lang," Anton recalls. "Then the next day, tawag ako, ‘Where's the doctor? Let me know kung kailangang i-ano.' Because there was a leak in her water bag. It was Monday night. Sabi sa akin, mukhang alanganin. So, Tuesday, I flew to Manila, ipinanganak na siya."

The baby who would later be christened Jacobo Antonio Taleon Lagdameo was two months premature, but otherwise he was fine.

"Okey naman siya," Anton says, smiling. "Wala lang fat in the body. That's why he was placed in the incubator. But other than that, okey na okey naman. Ang likot! Maingay."

For Dawn, however, the worst wasn't over yet.

"It was hard, very hard, because my husband couldn't be there all the time," she laments. "He stayed lang for one week after I delivered, and then he went home na to Davao. So I was alone in the hospital. It was the most depressing, depressing time. Talagang I kept crying."

Her comfort and joy, Jacobo, was away in another room, the hospital's Neo-natal Intensive Care Unit (NICU).

"Hindi ko pa mahawakan ang baby. They could not take him out of the NICU para dalhin siya sa kuwarto ko, kasi nakakabit siya sa dextrose. So, the fact that you're just in the hospital, you're alone, with all the hormones pa raging—urgh!"

The baby was shown to Dawn right after the delivery, but she only got to hold him three or four days later, when she breastfed him. "Doon ako naiyak. I had to go to the NICU to breastfeed him. There I saw him sa incubator, ang liit-liit, ‘tapos may dextrose."

The routine of going to the NICU every two hours for feeding only added to Dawn's depression. It didn't help that her baby was surrounded by other premature babies who were worse off than Jacobo.

When Jacobo was finally home, Dawn's breasts stopped producing milk. Dawn thinks the stressful ordeal at the hospital must have caused the lactation to stop. Jacobo had to be bottle-fed. This proved just as emotionally exhausting.

At one point, Dawn had a heart-stopping moment.

"Sabi ng doctor, don't panic daw. Babies daw at that age, they can stay without breathing for one minute. Sabi ko, ‘Are you sure?' Sabi niya, ‘Just relax. You have one minute to try everything first.' Sabi ko, ‘What will I do?'

"If, with all that you're trying to do daw, like massage the chest, he still does not resuscitate, you turn him upside down. Of course, that's you last resort, 'di ba? Hindi bale nang i-vomit niya lahat ng gatas, basta na-dislodge doon sa throat niya."

"After that, I was so afraid na. When I'm feeding him, no matter how sleepy I am, I'm really trying to stay awake to watch, making sure that he's really swallowing his milk. Because sometimes he falls asleep while he's eating, so nag-a-accumulate ýong milk sa mouth, ‘tapos nakatulog na siyang ganyan. Kung bigla mo siyang galawin, ‘tapos magising , masasamid."

But all that is history now. Jacobo turned one last October 19. He has turned on to be a healthy, well-adjusted, and smart little human being. He has even brought out the best in his parents.

"I became patient na with everything around me," Dawn says. "Parang bumait ako, feeling ko. And he's making me and Anton less serious. We're always smiling na. ‘Tsaka ngayon, I really don't know where I get my energy."

"I'm the type na I get crabby if I don't get my eight hours of sleep—nahihilo ako, I vomit. Pero ngayon, for some reason, I can still do whatever I need to do throughout the day kahit na ang tulog ko, putol-putol."

"Ang sipag ko nga. I never knew I had it in me na I could be this matiyaga. Kaya ko pala? So even if kulang na kulang na ýong tulog ko, wala lang, gusto ko naman ang kapalit. I just want to watch him."

It's hard not to fall in love with Jacobo. He smiles so sweetly and so often.

It's a trait, Dawn says, that Jacobo picked up from his mom and dad.

"Anton and I are the same. When I get hungry, nagduduling ako. ‘Pakainin mo ako, please!' Si Anton din, We get cross when we're hungry. So I think Jacobo's that way, too.

Already, Jacobo seems to be showing signs of separation anxiety. This could mean that Dawn will have to cut down on her acting assignments in Manila, if not totally give them up.

Then the delighted mom turns to her little one—and coos more happy sounds of love.