Nonito Donaire Jr.: "My relationship with my wife is more important to me than anything." 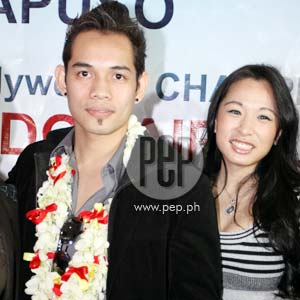 Pinoy boxing champ Nonito Donaire Jr. and wife Rachel are confident that fame and showbiz won't ruin their closeness. "I'll do anything for her," Nonito told PEP (Philippine Entertainment Portal) in a recent interview.

Still fresh from his impressive 3rd round victory against Mexican foe Manuel "Chango" Vargas last February 13 in Las Vegas, Nevada, U.S.A., the Bohol-born boxer was immediately offered by GMA-7 to pinch-hit for Pacquiao in the comedy sitcom Show Me Da Manny, which also stars Marian Rivera.

Manny is currently in the States preparing for his ring bout against tough Ghana native boxer Joshua Clottey on March 13 to be held at the massive Dallas Cowboys Stadium in Dallas, Texas.

Since his arrival back home last week, Nonito has graced the noontime concert variety show SOP and entertainment talk shows Startalk and Showbiz Central. Prior to those television appearances, Nonito was treated by the Kapuso network to a homecoming party at the station's main building in Quezon City.

Nonito considers showbiz a welcome break away from the grueling demands of boxing. Despite his tough warrior image, people close to Donaire describe the interim WBA World Super Flyweight champion as an entertainer who loves to sing and dance in the company of people close to him.

"Out of the ring he's such a clown," Nonito's wife Rachel revealed to PEP (Philippine Entertainment Portal) in a recent conversation. "Like when he was in Bubble Gang and the last time in Show Me Da Manny, it just comes out naturally for him. It's something that is a different outlet because when he's boxing, it's three months of full training, it was so tiring. So this [showbiz] is different outlet, it makes him relax and allows him to have fun and enjoy something that is not really his profession."

"She's always near me, she's always with me and sabi ko nga sa kanya, I'll do anything for her. Kung magkaroon ng time na parang nag-aaway kami kasi ganito, ganyan, then sasabihin ko sa kanya this [fame] is not important to me," said Nonito.

"Kasi sa akin, my relationship with my wife is more important to me than anything. Sabi ko nga sa kanya when I told her I love her, sabi ko sa kanya, 'Kahit ano kung gusto mong pahintuin ako sa boxing, I will.' That's the relationship that we have, we're willing to give up everything for us to stay forever."