Teen stars have fun under the sun in Camp Nivea 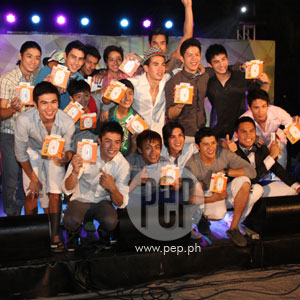 The boys of Camp Nivea celebrate after being awarded a Smart Bro kit each, for winning most of the games in the camp.

Thirty young stars took part in Camp Nivea, a three-day event that featured crash courses in modeling, fashion, disc jockeying, and other skills that a rising star would need.

DAY ONE. Camp Nivea's participants were expected to have fun in between the lessons. To stress the point, the campers first activity was to play a giant version of a Filipino game called Dr. Quack-Quack.

Afterwards, the campers headed to the DJ clinic with DJ Mike and DJ Mars Miranda. The campers had fun taking their turns at the turntables, while trying to mix their own music.

The first boys versus girls game followed. It was a relay where participants had to pass several obstacles while running, jumping and crawling on the beach. Not surprisingly, the boys won the round.

The intense game, however, injured one of the male campers. Be Bench finalist John James Uy scraped his right foot on the sand.

"I guess I got really into the game. I was running very fast and I slid in the sand, and I scraped all my skin on my foot. Hapdi! Actually I can't really walk straight," John James said.

Camp Nivea's Day One ended with a beach party, where the young stars had time to bond with each other.

The night's best dancer was Ruben Gonzaga, the winner of Pinoy Big Brother Celebrity Edition Season 2. His wacky moves inspired everyone to get up and dance.

StarStruck V finalist Ian Batherson felt a little hesitant to interact with the other teen stars in the camp. He was the only Kapuso talent in Camp Nivea.

"Everyone here is comfortable with each other... I'm talking to them naman pero, of course, not as close as... you know? But everyone is so nice here. Everyone is so friendly," he said.

Later on, he would grow closer to his peers. One of GMA-7's newest male stars has found new friends.

Fashionable tandem Robby Carmona and Sassa Jimenez coached the young stars on how to pick the right clothes and how to flaunt them. A multi-awarded fashion designer, Sassa instructed the campers about the different body types, and what clothes go well with each one.

Acclaimed fashion director Robby Carmona, on the other hand, trained everyone how to mix and match clothes together, and the proper way to model them.

In the afternoon, the young stars were taught how to pose for photos in Niccolo Cosme's headshot clinic. Each participant also had his/her photo taken, to judge who was the most photogenic.

After the headshot clinic, the participants headed to the pool relay for the next game. It was a close fight, but the boys also had to take this one.

The finale party featured a red carpet, an awards ceremony, and a special concert by Callalily.

The young stars entered the party venue wearing their best look for the night. Robby Carmona, Sassa Jimenez, magazine editor JR Isaac, and Nivea brand manager Vanessa Venturina judged who among them was most fashionable.

But as the night progressed, the young stars stood up and sang to Callalily's songs. Special mention goes to Franco Daza, Lance Christopher, Brian Poe Llamanzares, Ruben Gonzaga, and Albie Casiño, who emptied their lungs out singing "Magbalik."

The participants unanimously voted Ruben Gonzaga for the Best Buddy award. The oldest and wackiest camper, unsurprisingly, was the friendliest and the most helpful.

John James Uy and PBB Teen Edition Plus finalist Nicole Uysiuseng were judged to be the Most Photogenic. They each won Picsio digital cameras from JVC.

Nicole said she was happy for the recognition. "I did not expect to win," she said.

For winning most of the games, the boys took home one Smart Bro kit each. The girls were each given a box of Enervon capsules as consolation prize.

After the awards ceremony, Rica King, Nivea's marketing director, thanked the young stars for attending Camp Nivea. "It would never be as successful without you," she said.

The night then evolved into another beach party, and the young stars danced like there was no tomorrow.

Will Camp Nivea make a mark? Yes, it would. The three-day beach event may not be life-changing enough, but it taught them that there are friends willing to accompany them along the tough and treacherous road to fame.