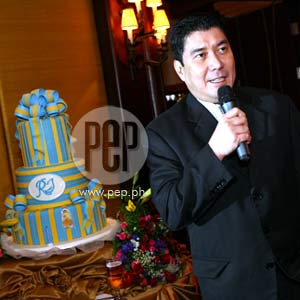 Raffy Tulfo thanks the high-profile guests who attended his 50th birthday party.

At 50, veteran broadcaster Raffy Tulfo deserves no less than a star-studded birthday celebration. The fearless radio host, who anchors the long-running program Wanted sa Radyo with Niña Taduran on RMN, did just that last March 5, when he hosted a formal dinner in the Garden Ballroom of EDSA Shangri-La Hotel in Mandaluyong City.

Before singing and dancing for Tulfo's guests, all the stars wished the celebrant good health, long life, and a better career ahead.

Arpie of the band Arpie and the Multivitamins and comedian Mang Enriquez served as the night's hosts.

SINGING FOR TULFO. Mang Enriquez opened the night when he sang a hilarious Tagalized version of Michael Jackson's "Smooth Criminal."

Then all eyes were on Raffy Tulfo when he sliced the cake specially made for the event. He also thanked the policemen who attended his party, adding that Wanted sa Radyo actually helps the Philippine National Police be a clean organization by weeding out its corrupt members.

Other stars who performed that night were Princess Ryan, Saicy Aguila, and Ethel Booba.

Truly, Raffy Tulfo's 50th birthday party was a star-studded night. It remains to be seen, however, if the stars will continue to shine on the veteran broadcaster's celebrated career.