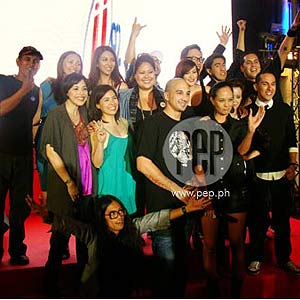 There's Pia Magalona "listening to her kids while arguing..."

They seem the usual situations on an ordinary day, but actually they're currently the "cool" scenes in the world of radio!

"Cool to be U," the tag of the latest venture of All Youth Channel Inc., was flagged during the launch, which was attended by one of the station's resident DJs, Pia Magalona.

She related her previous radio experience before hosting the currently-airing You Are My Life, "We were DJs on another FM station in the '90s. I remember, during Pinatubo days pa nga yun...kaya I know the technicalities, I know that concerts are very important...And I like the idea na marami kang na-i-influence, that's very important to me. Like when you speak, you're speaking to everyone."

And how does she find her job now, "I like it. I do love the company kasi. I really love the different personalities in their own way, and we just like doing things on purpose."

The party also had a short program, which mentioned the station's interesting offerings for different audiences.

Those who are always on-the-go and on-the-road, for instance, would enjoy listening to Turbo Time, which is hosted by Mike and Lindy Potenciano. Girls would appreciate the banter between Sarah Meier and Vicky Herrera in The Dollhouse. Music lovers would find a good company in Cesca Litton and Eri Neeman, who take charge of the all-request show Press Play.

All those DJs graced the party, which also introduced the other hosts—Angel, Patti, Carisse, Rye, Joshua Yu, Jimmy Muna, Tado, and KC Montero.

When PEP approached the latter for an interview, he said he'd prefer talking about ü92 FM than his recent separation from wife Geneva Cruz.

He enthused, "We have great music. We have a great line-up of shows. Different music, and a different attitude, and a different feel...With my show naman, it's OPM and Medley, but the station still gives the music that everybody likes."

Any plans of going back to TV?

KC answered, "I'm not having offers to go back to TV. If I did, I would think about it. But as of right now, I'm really having a good fun on the radio."

The party also had lotsa food and drinks for the guests; plus cool performances by the local bands Kwjan, Pedicab, Sinosikat, Corporate Lo Fi, and Pupil.

It was cool talking to the popular voices behind the airwaves. One of our quotable quotes that evening came from Tado:

Indeed, ü92 FM is set to make a statement!