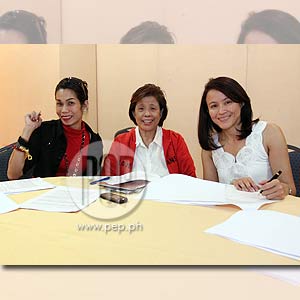 Pokwang says she is sexy not because of her thin frame, but because she can pull even the more bizarre outfits. "Kung papaano ako manamit sa Wowowee, mga ganun...na nake-carry ko nang bonggang-bongga yung mga outfit, mga ganyan," she states.

Pokwang is now, in effect, a Regal baby!

But the two-year contract she signed with Regal Films' lady bosses, Lily Monteverde and Roselle Monteverde-Teo, last March 16 at the Imperial Palace Suites is non-exclusive.

The host-comedienne was her usual sprightly self when she chatted with Noel Orsal, the official photographer of PEP (Philippine Entertainment Portal). "Siguro kung mag-start kami gumawa ng movie this year, 2012 [matatapos]," she said about the effectivity of her recent deal.

She is set to do Tempation Island, a cult classic of the late Joey Gosiengfiao that was released in 1981. Pokwang revealed, "Ako si Deborah Sun," who played Maria, the maid who got stranded in the island with the beauty queens. "Nakakatuwa siya, di ba?" Pokwang added.

But she kept mum about her other projects. "Yun na lang muna," she said. When asked about her list of possible leading men, she instantly gushed, "Papa P!!!"

And instead of talking more about her dream house, she turned to the lady beside her and said: "Napakabait sa akin ni Mother, sobra.. nakikita mo ba?"