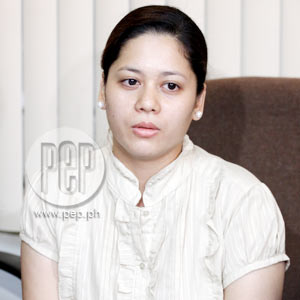 Contrary to recent developments, the Reckless Imprudence Resulting in Homicide case filed by Lorayne Pardo against actor Richard Gutierrez has not ended, as far as she is concerned.

Lorayne is the widow of Nomar Pardo, Richard's former personal assistant who died in a car accident last May 22, 2009 in Tagaytay-Sta. Rosa Rd., Silang, Cavite. Richard was driving the car. (CLICK HERE to read related story.)

Her statement refers to the March 10 resolution from the Department of Justice (DOJ), signed by former Justice Secretary Agnes Devanadera, that dismissed the homicide case against the actor. It also ordered the Provincial Prosecutor of Cavite to act on the withdrawal of the information in the Cavite court in under ten days. (CLICK HERE to read related story.)

In a press conference hosted by her lawyers Atty. Firdausi Abbas and Atty. Ombra Jainal at the Abbas Law Firm in Greenhills, San Juan City, this morning, March 25, a tough-willed Lorayne said she will continue her "fight for justice."

"This resolution, which is ridiculous, is borne out by Atty. Devanadera's character. And she's corrupt in all counts: dishonesty, incompetence and indolence," Lorayne Pardo's lawyer said.

(PEP (Philippine Entertainment Portal) sent a text message to Devanadera's personal cell phone number at 2:05 p.m. today, but there is still no reply as of press time.)

While the DOJ is acting on their motion for reconsideration, Atty. Abbas said Richard Gutierrez's arraignment scheduled on March 31 at the Municipal Circuit Trial Court in Silang, Cavite will push through. Cavite Judge Ma. Victoria N. Cupin-Tesorero ordered the actor to be present at the the hearing, to avoid being issued a warrant of arrest.

The actor was absent in the previous date of arraignment on February 10 due to "acute gastroenteritis with dehydration." (CLICK HERE to read related story.)

"PARANG NAMATAY ULIT SI NOMAR." At the presscon today, Lorayne delivered a short handwritten speech that summed up her feelings for the DOJ and the Gutierrezes.

NO SETTLEMENT. In recent interviews, the Gutierrez family said they were "happy" for the DOJ's "favorable" decision. Ruffa Gutierrez said the resolution allows her brother to "finally move on with his life." (CLICK HERE to read related story.)

In a separate interview, Richard declared that he wants to help Lorayne take care of Nomar's children. "I want to look after the welfare of his children, the sooner the better, lalo pa at malapit na namang mag-start ang classes in June. But we will do it in the legal way, kaya ipababahala ko na sa lawyer ko ang pag-aayos ng lahat para sa kanila," he said. (CLICK HERE to read related story.)

Lorayne, however, is not yet ready to move on. She said the chain of events convinced her to pursue the case further. She will never agree to a settlement, she maintained.

According to the mother of two boys, the Gutierrez camp still had not contacted her to extend the help they are promising to give her through the media after the DOJ resolution. She was further irked by the idea that she should be the one to approach Richard's family.

Lorayne said she has enough faith that she can survive even without Richard's offered help.