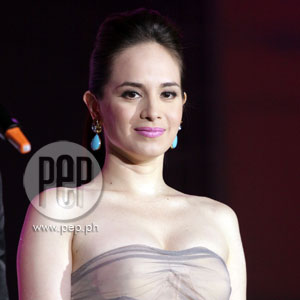 As one of the longest-staying celebrities of TV5, it was fitting that Lucy Torres-Gomez opened the program for the grand re-launch of TV5 called "Para Sa'yo, Kapatid" last March 25 at the World Trade Center in Pasay City.

Of course, there is no better way to welcome her new "Kapatids" in the network than to show them her dancing skills, which she has always credited from hosting the top-rating dance show Shall We Dance.

In a quick interview with the celebrity host after the trade launch, she expressed how happy she is that her TV5 family is already growing.

In her earlier days with TV5, when it was still trying to get its share of spotlight from the two giant networks—ABS-CBN and GMA-7—Lucy was joined by only a few celebrities. Most of them were usually "borrowed" from other networks. Now, with the revamped TV5, the TV host-dancer will be joined with more local celebrities who transferred from the other TV networks.

Does this mean TV5 will now be part of the "network war" in local television?

Lucy replied, "At TV5, everybody's very friendly to the other stations so I hope na with the entry of TV5, mas mawawala nga sana yung network war, e. Kasi, if you think about it, it is just one industry and there's a lot of room for everybody to shine. So, hindi kailangang magbangayan o mag-compete. Masyado na 'yong 'the best kami.' Dapat ano lang, healthy competition and also have fun."

As one of the prime stars of TV5, what would she advise her new Kapatids?

"Well, I know most of them. I've worked with most of them so I'm very happy. It's really good for the industry because not only as it shaking the industry, it's also providing a lot of work for the artists. Kasi, ang dami talaga nating artist na underutilized. So now, with more stations in the field, then mas maraming magsha-shine, mas masaya. Ultimately, mas maraming viewers ang nase-serve," Lucy said.

CAMPAIGN OF RICHARD CONTINUES. Last year, Lucy's husband Richard Gomez had been very vocal about his intention to serve the 4th District of Leyte. However, a month before the local election campaign started last March 26, the Commision on Elections (Comelec) barred the actor-TV host from running as congressman because he reportedly failed to establish residency in Ormoc City.

Lucy said they're still petitioning the decision of the Comelec.

"There's a motion for reconsideration," she said. "It's still pending, wala pang decision. But whatever the decision, we will fight on, we will finish the race. Umabot man kami ng Supreme Court."

Will Richard still be campaigning as candidate for Leyte's 4th District in spite of the disqualification issue?