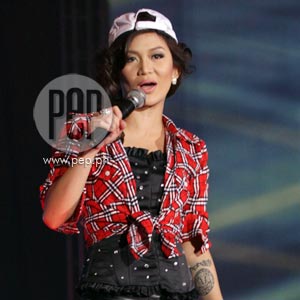 "It's not about the money or the contract that TV5 offered me, or the number of shows they have given me. Although it's very flattering na you feel important here, kasi ganun agad yung attention na binibigay," said the Show Me Da Manny comedienne.

Tuesday Vargas says she will still be seen in the weekly sitcom of GMA-7 Show Me Da Manny despite her contract with TV5. She will also still be part of the Kapuso network's talent search program Diz Iz It.

The comedienne had already taped her scenes in Show Me Da Manny's April episodes when she was introduced as one of the newest Kapatid of the revamped TV5 last March 25.

Tuesday clarified that contrary to initial reports, she properly informed the network's management of her decision to do shows on TV5.

NO CONTRACT WITH SEVEN. Tuesday revealed that she's never had a contract with GMA-7 despite working on several shows for the network. These programs included TV drama series Mga Mata ni Angelita (2007), Lupin (2007), Kaputol ng Isang Awit (2008), Totoy Bato (2009), and the comedy Show Me Da Manny.

"Actually we haven't signed anything sa Show Me the Manny for three seasons although we've been asking for a contract for quite a while, kaya nabigyan nila kami ng permiso na okay na.

"Parang verbal contract. Pero everybody has one. I don't understand how come some of us, hindi lang ako, we don't have an official contract. So, we've been asking for three seasons to formalize everything."

Since no formal contract seemed to be forthcoming from GMA-7, Tuesday opted to sign a non-exclusive one-year contract with TV5. As its new talent, she will be acting in its comedy show LokomoKo U. She will also become one of the hosts of TV5's Sunday variety show called Party On 5, also known as P.O.5.

CLEARER PATH AT FIVE. She told PEP that the reason she accepted the offer was because TV5 showed her a clearer career path.

"'Tapos dumaan ang mga nakatatlong taon na rin po ako, wala po akong nadidinig na meron silang balak na plano for me. So naisip ko, 'Pa'no kaya ito?' Kasi bilang isang magulang, ikakasal ako sa June, I have to think about the future and I have to prepare for the life na dadating sa 'kin. So this is actually a move not just for me but for my family as well," she narrated.

The decision to transfer didn't come easily, Tuesday said, but she thought TV5 would give her more opportunity to grow as an artist.

"Kung masusunod, ayoko po talagang mawala sa Show Me the Manny. Kasi, una may mga relationship na na-build and 'yong friendship with the staff nandoon na. 'Tapos masaya siyang gawin, parang hindi siya work. So, nami-miss ko every Tuesday na makikita ko silang lahat, ganun. Pero, aside from that, everybody has to move on, everybody has to someday grow up. Ayun, this is my way of saying na, 'This is the next step for me,'" stated the comedienne.

She reiterated that transferring to TV5 does not mean she won't be able to work with other networks. Her non-exclusive contract "made sure na I could still guest in other networks kasi si Mr. [Manny] Pangilinan [TV5 chairman], he insisted na ganun yung maging principle ng lahat ng artists, na hindi maging selfish yung network."

MARRYING LONGTIME BEAU. Aside from having a new home network, Tuesday was also smiling because she will finally tie the knot with her boyfriend of six years, Session Road band member Coy Placido in June. (CLICK HERE to read related article)

The actress said that the wedding would be more like an announcement of their relationship, "na ito na 'to, wala nang talikuran, kami na talaga 'to, formalization lang."

She said she and Coy didn't think about getting married until Judy Ann Santos and Ryan Agoncillo had their secret union in San Juan, Batangas in April 2008.

What are her expectations when she formally becomes the wife of her longtime boyfriend?