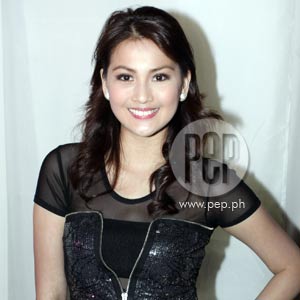 Actress Dianne Medina is no longer part of Star Magic's roster of talents. At the trade launch of TV5 held recently at the World Trade Center in Pasay City, Dianne told PEP (Philippine Entertainment Portal) that her decision to part ways with ABS-CBN's talent arm coincides with the non-exclusive contract agreement she signed up with TV5.

The parting of ways, according to Diane, was amicable. Since her contract with TV5 is non-exclusive, it is still possible for Dianne to work with the Kapamilya network.

Dianne's television credentials with ABS-CBN include Wazzup Wazzup, Star Magic Presents, Komiks Presents: Tiny Tony, Dyosa, Kambal sa Uma, May Bukas Pa, and Precious Hearts Romances Presents. She was also seen in the comedy gag show Banana Split, before the show had to reformat and let go of some regulars.

With Star Magic out of the picture, Dianne's mother is currently acting as her manager. "I'm very happy with TV5," said Dianne. "I'm currently doing two shows, Lokomoko U and BF/GF, which is being directed by Joyce Bernal."

So that means no out-of-town trip for the pretty mestiza actress?