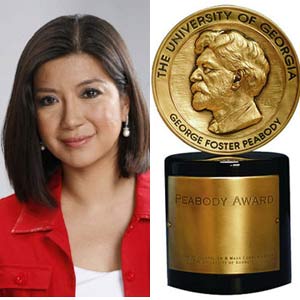 Kara David's I-Witness documentary "Ambulansiyang de Paa" will be honored in the 69th Peabody Awards. The awarding ceremony will take place in New York City on May 17.

The I-Witness documentary "Ambulansiyang de Paa" is among the 36 recipients of the 69th Peabody Awards this year. This episode of the GMA-7 show was the Philippines' lone entry in the prestigious award-giving body.

The official website of the Peabody Awards described the documentary thus: "Condemning deplorable conditions while celebrating neighborly valor and ingenuity, the report shows how people in a poor village carry their sick and injured over dangerous terrain to distant medical care using 'ambulances on foot.'"

Aired on March 2009, "Ambulansiyang de Paa" was hosted by Kara David and directed by Nowell Cuanang. It chronicled how residents of the Mangyan community of Apnagan in upland Oriental Mindoro use woven hammocks to carry sick people to distant hospitals because there is no health center in their area.

Kara is the daughter of veteran columnist Randy David.

It is interesting to note that HBO's "Thrilla in Manila," a documentary that probes the hype, mythology and meaning of the politically charged Muhammad Ali-Joe Frazier fights in the early 1970s, was also honored with a Peabody Award this year.

Diane Sawyer will host the 69th Annual Awards ceremony on May 17 at the Waldorf-Astoria in New York City.

The board that chooses this year's recipients is composed of television critics, broadcast and cable industry executives, academics and experts in culture and the arts. All entries become a permanent part of the Peabody Archive in the University of Georgia Libraries.

Noodle Road: Connecting Asia's Kitchens (KBS1 TV)
Korean Broadcasting System
The who, where, what, why and how of Asia's culinary staple, rolled into one visually delicious hour.

A Hidden America: Children of the Mountains (ABC)
ABC News
A powerful documentary shot in the hollows and house trailers of Appalachia reminds us that not all critical problems lie in "developing" nations.

Independent Lens: Between the Folds (PBS)
Green Fuse Films, ITVS
A beautiful documentary about the art of paper folding, it makes you gasp at the possibilities -- of paper and of human creativity.

Glee (FOX)
Twentieth Century Fox Television
Dependably tuneful and entertaining, the musical dramedy that revolves around the motley members of a high-school choral club hit especially high notes with episodes such as "Wheels," about the daily struggles of a wheelchair-bound singer.

The OxyContin Express (Current TV)
Vanguard on Current TV
With tales of drug-dealing MDs in Florida and Appalachian "pill-billies," the documentary makes clear the enormity of the prescription-drug epidemic.

npr.org
National Public Radio
A whole lot of things considered, from "South Park" to North Korea, make this one of the great one-stop websites. And there's music you can dance to.

The Day that Lehman Died (BBC World Service)
A Goldhawk Essential Production/BBC World Service Production
Merging news with dramatic reconstruction based on exhaustive interviews, this rare docudrama for radio put listeners in the boardroom and halls of Lehman Brothers as the financial giant collapsed.

In Treatment (HBO)
Leverage, Closest to the Hole Productions and Sheleg in association with HBO Entertainment
Giving new meaning to the phrase "theater of the mind,' this fictional series of psychiatrist-patient one-on-one's is the very essence of drama.

No. 1 Ladies' Detective Agency (HBO)
Mirage Enterprises and Cinechicks in association with The Weinstein Company, BBC and HBO Entertainment
Alexander McCall Smith's best-selling novels about Precious Ramotswe, an African detective, come vividly to life in this groundbreaking series, shot on location in Botswana.

Sabotaging the System (CBS)
CBS News 60 Minutes
Alarming and then some, Steve Kroft's survey of cyber-threats to America's infrastructure made it clear the siege is on and questioned our readiness to defend.

FRONTLINE: The Madoff Affair (PBS)
FRONTLINE, RAINmedia
The documentary takes viewers into the very heart of Bernie Madoff's Ponzi scheme, explaining how and why it worked for so long.

Hard Times (OPB Radio)
Oregon Public Broadcasting
The Main Street repercussions of Wall Street's reckless ways were nowhere in the media more humanly and thoughtfully documented than in this series of radio reports.

Soraya Sarhaddi Nelson: Covering Afghanistan (NPR)
National Public Radio
No reporter in any medium gives us a better sense of the variety of life inside Afghanistan than the multi-lingual chief of NPR's Kabul bureau.

Endgame (PBS)
Daybreak/Channel 4/Target Entertainment, Presented on PBS/MASTERPIECE by WGBH Boston
This intensely dramatic film, focused on secret negotiations at an English country estate–talks that helped to end apartheid in South Africa–offers a lesson in the possibilities of peaceful conflict resolution.

Sichuan Earthquake: One Year On (Now-Broadband TV News Channel)
Now-TV News, Hong Kong
The Hong Kong-based news organization noted the anniversary of the terrible Sichuan quake with respect for the victims and their families and hard questions about the substandard construction that worsened the death toll.

BART Shooting (KTVU-TV)
KTVU, Oakland, Calif.
KTVU's quick response to a train-station altercation that ended in a fatal shooting gave its reporters an edge, but it was their persistent digging afterwards that revealed serious, systematic problems in the Bay Area Rapid Transit police's tactics.

American Masters: Jerome Robbins -- Something to Dance About (PBS)
Thirteen/WNET
A retrospective of Robbins' life and work illustrated with dazzling performance clips and annotated with comments from noted ballet and Broadway colleagues, this brilliant documentary captured the legendary director/choreographer's "dark genius."

Chronicle: Paul's Gift (WYFF-TV)
WYFF 4, Greenville, S.C.
Simple, ingenious and effective, this public-service special followed the donated organs of an accident victim to a variety of recipients, showing their joy and gratitude, thus boosting a most worthy cause.

Derrion Albert Beating (WFLD-TV)
FOX Chicago News: WFLD-TV and myfoxchicago.com
WFLD got national attention with horrifying video it obtained of the beating death of an honor student just blocks from his Chicago high school, but the greater feat was its comprehensive follow-up coverage of the suspects, the legal process and prevalence of similar violence.

Up in Smoke (KCET-TV)
KCET, Los Angeles
Lively, eye-opening coverage by KCET's "SoCal Connected" included a revelation that there are now more legal, medical-marijuana dispensaries in the city than Starbucks franchises, and a rare look at the "Cannabis Cowboys," an elite police team of pot-farm eradicators.