Claudine Barretto: "Sometimes you just really have to get out of your comfort zone." 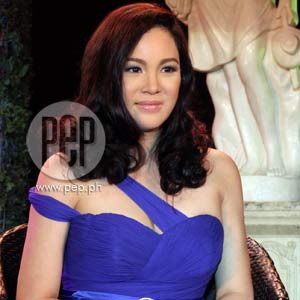 Claudine Barretto was pleasantly surprised to see former co-stars from ABS-CBN greeting and wishing her luck on her upcoming drama anthology series with GMA-7, which will air this coming Saturday, April 10.

Seeing Judy Ann made Claudine light up. Despite their supposed rivalry brought by their respective success in doing drama roles, Claudine stressed anew that they are friends in real life.

EMBRACING RISK. While the show of support coming from old friends is a clear indication that Claudine's network transfer did nothing to affect their friendship, the same cannot be said about the actress' relationship with her former home network.

Based on Claudine's reaction last night, it was obvious that Claudine's decision to jump ship was triggered by the uncertainty of her status with the network she considered home for many years.

The erratic flow of work assignments, according to Claudine, convinced her to re-examine available options on the table. Her transfer cut short the planned TV series featuring Claudine and Gretchen.

The decision to join a new home network required a lot of thinking and consideration. Claudine sought the help of "close friends and pastors" to guide her through the process. It eventually became clear that a fresh start was needed until "ito na nga dumating na 'yong offer [from GMA-7]."

The episode marks the first time that the viewers will see the couple do straight drama together. Even Claudine and Raymart never thought that they would be given a chance to work together because of their respective network affiliations in the past.

With her transfer to GMA-7, Raymart has "no choice" but to work with her, joked Claudine.

The show's staff refused to identify Claudine's next leading man after Raymart. But given a choice, Claudine named Richard Gutierrez, Dennis Trillo, and Dingdong Dantes, as some of the actors she would like to work with in future episodes.