Dawn Zulueta: The Best of Both Worlds 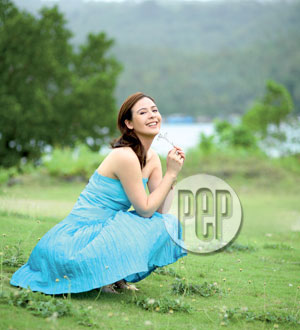 Behind Dawn's sweet and graceful façade is a master storyteller. She has us laughing hard when she recounts a conversation with Viva's Boss Vic del Rosario on what kind of image was suitable for her. She was 19, and "napaka-tweetums-tweetums pa ako noon!" Boss Vic: "Ano'ng gusto mong gawin? Anong direksyon ang gusto mo as an actress? [no reply] Sino na lang idol mo?" Dawn: "Si Sharon Cuneta! Puwede ba akong gumawa ng movies gay

Dawn Zulueta arrives right on the dot for the YES! magazine exclusive interview and pictorial at Pearl Farm on Samal Island, Davao, a beach resort owned by the family of her husband, Anton Lagdameo. This is remarkable. After all, she has to travel by land and sea to get to the island. In fact, she arrives in a private motorboat.

The lady is beautiful.

And for YES!, this is serendipity. Year 2006, when we visit Dawn in that spot of the Philippines she has called home after marriage is the year Dawn marks her 20th anniversary in show business.

From Ferris wheel to Viva Films. It was in 1986 that her first-ever movie was released—Nakagapos na Puso, where she played Sharon Cuneta's friend. "I was only 17," Dawn recalls.

Dawn was discovered for the movies after doing a commercial for Close Up toothpaste. The scene featured a Ferris wheel, she says. "Ang partner ko was Tonton Gutierrez. And who was in the background? Eric Quizon. Lahat kami, after that particular commercial, nag-movies na."

The ad brought Dawn to the attention of Viva Films' Vic del Rosario and Mina Aragon. They immediately signed up the dusky 5-foot-7 beauty and got her included in the roster of co-hosts of the Sunday variety program, The GMA Supershow, principally hosted by German Moreno. Dawn still remembers the fun and the frenzied atmosphere on the show, which was also co-hosted at one time or another by Sharon Cuneta, Lani Mercado, Jackielou Blanco, Jean Garcia, and Gretchen Barretto.

Under her first manager, Roxanne Lapus, Dawn was also training to become a singer, since Roxanne's other talents—Raymond Lauchengco, Dingdong Avanzado, Ogie Alcasid—were singers. Raymond did a duet with Dawn on one of his early albums.

She didn't have time to mull over what to do next. The decision was made for her when she was offered a role in Fernando Poe Jr.'s next film, One Day, Isang Araw.


Romancing Richard . In 1991 producer Armida Siguion-Reyna got Dawn for Reyna Films' Hihintayin Kita sa Langit, which was to be the first major directorial job of Armida's son, Carlitos Siguion-Reyna. It was the first time for Dawn to work with heartthrob Richard Gomez.

"There was no way we could have ever been brought together because Richard's Regal and I'm Viva. The only way Richard will go to Viva is with Sharon. 'Buti na nga lang, pinayagan ako ni Boss Vic, pinayagan din siya ni Mother Lily. Kasi Tita Midz talked to both producers."

(In case you just got in from Mars, the persons referred to are Boss Vic del Rosario, Mother Lily Monteverde, and Tita Midz Siguion-Reyna.)

Hihintayin Kita sa Langit, loosely based on Emily Bronte's novel Wuthering Heights, proved pivotal not only for Dawn's professional career but also for her personal life.

Armida Siguion-Reyna has said of that tandem: "I have never seen such chemistry on screen. Richard and Dawn are the best thing you will ever see together on a movie screen."

Dawn herself says, "I got to work with such a really good team. Ang dami kong natutunan while shooting that film. And a romance was born out of that film. A romance that I think I'll never forget."

Of course, she's talking about her relationship with the tall, dark, and handsome Richard Gomez. "Towards the end of the filming, mag-on na kami."

The romance, however, caused a media frenzy, partly because Richard had just come from a relationship with megastar Sharon Cuneta. Wrongly, the press targeted Dawn as the third party who had caused the breakup of two big stars.

"I felt terrible. I obviously didn't have any clout, right? Who's sikat ba here? It's only the two of them naman that's sikat, e. Here I was, just a starlet, and I was being lambasted by the press. I got a taste of what it's like to be on the receiving end. Kaya I really appreciated that there were a few press people who wanted to hear me out. It didn't matter to them na ang sikat-sikat ni Sharon and all that."

The fans, too, entered the scene. Wherever she went, Dawn says, the fans were screaming: "Richard-Sharon pa rin! Mas maganda pa rin si Sharon sa 'yo!"

"We did not have a moment of peace. Every time we would try to concentrate on each other, merong gustong mag-intriga. I was only 21. When I think about it, ang bata-bata ko pa. Parang wala pa talaga akong sense of the world, you know. So mabilis akong maapektuhan. Kung ngayon siguro I have a relationship like that, I think I'll handle it differently. But at 21, what do I know?"

After two and a half years, the romance went pfft.

Despite the breakup, the two have remained good friends. And that's not a press release, either.

Even Richard and Anton are on friendly terms. The two had the occasion to get together during the victory party for the cast of Filipinas held three years ago at the Peninsula Hotel.

And best of all, Dawn and Richard's wife, Lucy Torres, get along. Lucy has bead napkin rings made by Dawn, and she once told YES! editor Jo-Ann Maglipon: "Of all of Richard's girlfriends, the one I liked best for him was Dawn. I always thought they were bagay. I remember I always got kiligwatching them on screen."

Losing Lino. While Dawn and the YES! staff are on a halo-halo break, she talks about one unforgettable moment in her career. That was when she turned down the lead part in the movie Gumapang Ka sa Lusak, helmed by acclaimed director Lino Brocka.

"He wanted me so much talaga. Unfortunately, I was so young. I think I was only 19. He wanted me to do a scene with Eddie Garcia na in the bathtub na love scene. I was so repulsed."

She told Lino: "Direk, I can't talaga. I can't see talaga myself doing that." To which the director replied: "But Dawn, this is gonna be a role that's going to catapult you. This is perfect for you! This will make you an actress!... I'm not gonna make you come out ugly. The scene will be done tastefully."

Still, Dawn resisted. "I could not get it," she now says. "I guess it comes with age. I was only 19. I couldn't imagine kissing anyone else other than my boyfriend. I think sumama talaga loob ni Direk. He was disappointed in me. Kasi parang I didn't wanna trust him."

Two years later, Lino died in a car accident. "So that's my regret," Dawn says. "That sana before he passed on, sana there was another opportunity. I really felt that was the end of my career."

But Dawn was wrong. In fact, her career continued to flourish.

Burnout and Box-Office Queen. Hihintayin Kita sa Langit won for Dawn a best-actress trophy in 1992 from the Filipino Academy of Movie Arts and Sciences (FAMAS). "I think that was my first-ever nomination pa nga, and I won pa." That same night, she got the award for best supporting actress, for Una Kang Naging Akin.

The punishing schedule, however, led to burnout.

Stardom, she found out, was not fun at all: "Ang dami ko ngang pera sa bangko, pero at the end of all these, magpapaospital lang ako? Magpapa-facelift? Wala na, e. Papangit ako, di ba?"

Dawn notes that some of today's young stars are going through the same things she went through in her prime.

"When I look at the younger ones—sina Angel Locsin, Iza Calzado—parang naaalala ko no'ng ganoon din ako na age. Parang, wow, ang dami n'yong landmines na matatapakan. You really have to be brave. It's all a matter lang naman of fixing your schedule. You earn so much money, you give it to yourself to enjoy it naman."

But in between the killer schedule and the loss of sleep, Dawn remembers the times when she was most proud to be an actress. Like the time she did The Maggie de la Riva Story. "Naging Box-Office Queen ako because of that. Proud na proud ako. Hindi ko akalain ever na magba-Box-Office-Queen ako. Di ba, never nangyayari 'yon? Si Sharon lang palagi ang Box-Office Queen."

Back for good. After giving birth to her son Jacobo, Dawn is back in the limelight. She starred in the "Duyan" episode of GMA-7's Now and Forever and is currently one of the most in-demand endorsers.

When it comes to projects, she is looking forward to more challenging roles in the drama arena: "Do'n lang naman talaga 'ata ako nagpo-flourish, e. I hope there will be opportunities for that."

But she admits to certain limitations: "I just know that Anton's uncomfortable with me having kissing scenes. So even if he hasn't told me na ‘You can't accept a film with a kissing scene,' I know nahe will not be happy with it. So I just have to set that limitation."

For now, Dawn is setting her sights on a different showbiz role: producing for television.

"If there's a nice script and I could co-produce by probably waiving my talent fee, I'm open to that. I just hope it comes soon. While I'm still young."

Outside showbiz . In marrying Anton, Dawn knew that she would be adjusting to a new life outside the glitz and glamour of showbiz. "The only thing I knew was show business and that world, because I had been so out-of-circulation," she recalls. "Wala na akong ibang alam kundi 'yon."

Since living in Davao, however, she has developed new interests and has come to appreciate the attractions of her new surroundings. Now she has an advocacy and a cause: the preservation and the beautification of Davao.

Speaking like a true-blue Davaoeño, Dawn passionately expresses her concern for the preservation of Davao's environmental treasures.

"I see Davao as becoming the next capital na gaya rin ng Cebu, na booming siya talaga. Pero ang concern ko, 'wag naman sanang to the point na are we going to become another Manila? Sayang, e. I'm all for the growing of the city infrastructure, the development, sure. But do not chop down so many trees. You can always build around these things."

Dawn isn't shy about promoting the attractions of Davao, either.

When she was a newlywed and the new kid in town, Dawn had to adapt to her new family and to Anton's social circle.

"Nag-simplify talaga ako, totally. 'Yong lifestyle ko, 'yong total persona ko. Hindi ko madala do'n 'yong pagka-diva ko. Kasi sanay ako, lalo na sa showbiz, everyone's catering to me and all that. It's not that way when I'm in that circle. I am, like, just one of the younger ones there that have to cater to the elders. O, baliktad di ba? They're not gonna treat me any more special. They're also making you kilatis.

Catch a glimpse of Dawn's world outside of showbiz—the one she calls paradise.