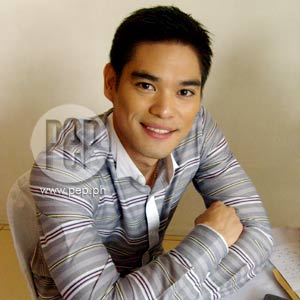 Krissa Mae was invited by legendary Spanish singer Julio Iglesias to join him on tour following his successful Manila charity concert held on March 20 at the Araneta Coliseum in Quezon City. The tour will reportedly stretch for three months covering Asia and other continents. Julio's tour calendar for this month includes Malaysia, Japan, and Hawaii.

Jay-R flew to Malaysia instead during the long holiday to watch his girlfriend perform.

"It was nice to see her kasi I miss her so much talaga. And as soon as I had free time, buti na lang 'yong Holy Week may apat na araw akong off, so I had time to see her talaga," Jay-R confided to PEP (Philippine Entertainment Portal) and other members of the entertainment press earlier today, April 7, at the taping of his upcoming dating game show, Take Me Out.

Take Me Out will replace Family Feud starting April 26 and will be aired on GMA-7.

Rumor has it that Jay-R felt very disappointed at Krissa Mae's decision to accept Julio's invitation rather than stay here in the country to spend quality time with him. The couple barely had time for each other during the course of the Binibining Pilipinas beauty pageant. Krissa Mae eventually won the Bb. Pilipinas-International title.

FEELING FOR VENUS RAJ. The decision of the Binibining Pilipinas Charities, Inc. (BPCI) to strip Maria Venus Raj of the Bb. Pilipinas-Universe crown saddened Krissa Mae, according to Jay-R.

The statement released by BPCI said that Venus's records were found to have "inconsistent" details. Her birth certificate reportedly indicated that she was born in Camarines Sur. Interviews conducted by the BPCI representatives, however, mentioned that Maria Venus cited Doha, Qatar as her place of birth and that her father was an Indian national. (CLICK HERE to read related story.)

Krissa and Venus—though friendly with each other during the pageant—are not really close, observed Jay-R. "I don't think they talked to each other often."

Jay-R also defended Krissa Mae against accusations that she had a hand in the verdict rendered by the pageant's organizer against Venus. Immediately after the pageant's grand coronation night, rumors started circulating that the Bb. Pilipinas-Universe crown was originally promised to Krissa Mae.

"It's not true," Jay-R stressed, pointing out that the runner-up automatically assumes the vacated throne in case the original winner is dethroned. "So, that means she's not eligible [to assume the title]. Parang wala ding point."