STARBIZ: Angel Locsin opens her own Bar and KTV 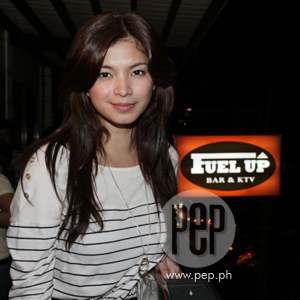 Together with nine of her friends, Angel Locsin established Fuel Up Services, Inc., and formally opened Fuel Up Bar & KTV.

Located at #36 Holy Spirit Drive corner Don Matias in Don Antonio Heights, Quezon City, the bar had its "big kick-off party" last Friday, April 23, after its dry run and soft opening last month. The party also served as a double celebration since Angel was celebrating her 25th birthday that night. Partying with Angel were her friends from both inside and outside showbiz.

Angel was so busy attending to her friends that PEP (Philippine Entertainment Portal) never got the chance to talk to her and ask more about her bar. The road manager of Angel volunteered to give us more info, but the promise remained hot air over our attempts to contact her since the launch.

Anyway, here are a few things we know about Angel's latest venture: It has three KTV rooms that can hold 8 to 15 people, an open air lounge with a mini-bar, a garage lounge with live band, and a VIP room that has a life-size BMW mini-cooper.

Fuel Up's signature cocktail drinks are named after cars and anything that has to do with them, like the Flaming Ferrari, Total Wreck, Wang Wang, Quarter Mile, Skyway, Hit & Run, Velocity, and Expressway.

Also that night, Angel had a special guest—her custom-made RV (recreational vehicle), a 2010 Ford E450 bus converted to a Class-C "cab-over" motorhome. Angel had the original 14-passenger seats of the bus torn-off and replaced with a double-deck bed, sofa, cabinet, and dresser. It also has its own bathroom and an LCD TV.