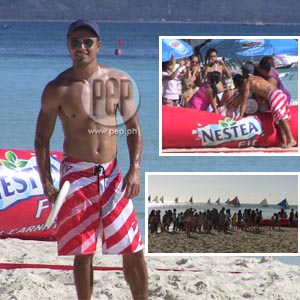 Derek Ramsay is in his element. He is presently the captain of Frisbee's national team. "I love to play sports. When someone admires me for that, it's actually the real side of me," he says. While playing, (inset, top) fans seize the moment to have a photo op with him. And more (inset, bottom) people followed after his exhibition game for the Nestea Fit Beach Camp Hot in Boracay.

Looking for Derek Ramsay in Boracay? Just look for a throng of people holding their digital cameras and camera phones.

Wherever he goes, fans can't seem to get enough of the Kapamilya star. Whether he's putting on sunblock lotion or taking a quick break from a game, or even when he's in the middle of a game—they want a "pa-picture" with Derek!

And whenever he can, the 29-year-old actor obliges with a smile.

He tells PEP (Philippine Entertainment Portal), "You know it's a great feeling. I've always had... Hindi ako masasanay. Until this day, I don't know why, every time they scream my name, they ask for picture. And I try to please everyone."

The organizers of Nestea Fit Camp Hot have resorted to having a crowd control group for the actor every time he leaves his hotel.

"I'm kind of a nightmare for the people trying to get me into the place, and trying to stop every person to take my picture," says the self-effacing Filipino-British actor.

THE REAL DEREK. He seems to be unaffected by fame. He doesn't think about his looks when trying to catch a Frisbee. He doesn't mind getting all dirtied up while stealing the ball in a game. He doesn't let the scorching heat of the sun prevent him from trying beach volleyball.

Derek is in his element when he's playing. "That's actually what I want to be known at. When someone admires me for sports, it actually pleases me more, because that's even more Derek Ramsay. It's a great experience," he confesses.

Since he was two years old, he's been "kicking the ball" around his play pen. And growing up, the actor says, "If there's an event that has something to do with sports, Derek Ramsay is there."

His active lifestyle has helped him achieve his "famous celebrity" status. Those abs have elicited a lot of shrieks and giggles from the ladies. Those hours spent on sports activities have made the guys go, "You're the man!"

"I love to play sports. I love meeting people. It gives me that certain drive, and it entertains me. So when someone admires me for that, it's actually the real side of me," Derek affirms.