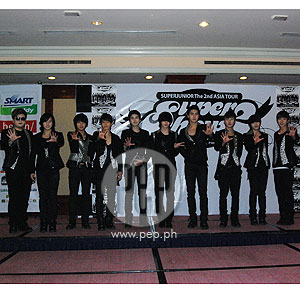 Super Junior, the first all-male pop group from South Korea to have hit songs in the local charts, performs a one-night-only concert tonight, April 10, at the Araneta Coliseum in Quezon City.

Korean pop group Super Junior is scheduled to hold its first full-length concert, Super Show 2, at the Araneta Coliseum at 7 p.m. tonight, April 10. The all-male performers, better known as SuJu to avid fans, is the first ever K-pop band to hold a major concert at one of the biggest entertainment venues in the Philippines.

In a press conference held earlier today at Edsa Shangri-la in Ortigas, members of Super Junior expressed their excitement for the concert.

"We've heard that we're gonna be having our concert in a big dome, so we're very much excited for it," said group leader Leeteuk in Korean. "The whole show is filled with eye-catching surprises.

"There will be a very special performance wherein we dress up as girls," he further revealed, explaining that they would be mimicking f(x), their sister group from South Korea's SM Entertainment. "So please watch out for that surprise," he added.

K-HITS IN LOCAL CHARTS. SuJu has visited a total of nine cities for Super Show 2, including Hong Kong, Taipei, Beijing and Bangkok, with the Philippines as the last leg of their Asian tour. Their song "Sorry Sorry" from their album of the same title catapulted the group to stardom in this country. They are currently the first male singing group from South Korea to hit the local charts.

Leeteuk later sang a short song for the Filipino fans, saying it reminds him of the Philippines. "It's something that you cannot see on TV. So it's very special for you guys."

KOREANOVELA TIE-UP? One member of SuJu openly expressed his interest to do a television drama in the country.

"I'm very shocked to realize that I'm the most popular member here," said Lee Donghae, after members of the press told the 23-year-old of his popularity among Filipino K-pop fans.

He was happy to know that his popularity also meant gaining more attention for SuJu as a group. He later wished that he could make a local soap opera in the future, a statement that endeared him to the press.

GETTING TO KNOW THE MEMBERS. Originally a 13-member group, Super Junior is set to stage their Super Show 2 concert at the Araneta Coliseum with only ten members. One member, Hankyung, recently had his contract terminated by SM Entertainment and another, Kangin, currently has to deal with legal matters outside of Super Junior. Member Kim Kibum is also absent due to solo activities and prior engagements.

"Thank you so much for all your support and warm welcome," thanked Donghae. "It's our first time, however we hope to enjoy the whole time in our show."

Leeteuk added, "It's our first visit in the Philippines, but thank you so much for your love and your attention. And we're very happy to hold our last leg in the Philippines. So please give us your continued support and love for our upcoming music, and we'll try to show you the best of Super Junior."

Super Junior's fourth album is currently underway. All of Super Junior also expressed their wish to come back to the Philippines for Super Show 3, their third Asia tour.