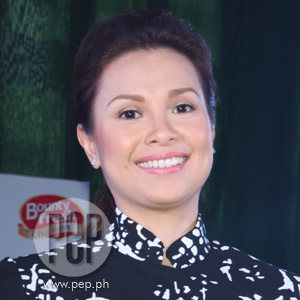 "If she wants, but I don't want her to go into show business just because she's my daughter. She has to want it, she has to want it really bad, she has to want it twice as much as I ever did. She has to desire it, e. It cannot be, 'Sure, I'll try it out.' Puwede ba! 'Wag na lang, it's a waste of time kung ganun yung attitude mo," says Lea Salonga when asked if she'll allow her four-year-old Nicole Beverly to enter showbiz.

Lea Salonga had a special guest when she graced the press conference of Bounty Fresh held earlier yesterday, April 12, at the Manila Peninsula Hotel in Makati City. The world-renowned singer-actress pointed out that her daughter Nicole Beverly, who will turn four this May, was in the audience and that the press could ask Nicole herself if she wanted to join showbiz someday.

During the brief program hosted by Bianca Gonzales, Lea regaled the press with her rendition of "Somewhere Over the Rainbow" before sitting down to answer questions from the media.

As the new endorser of Bounty Fresh chicken, Lea revealed that she likes cooking for her daughter Nicole and her husband Robert Chien.

"I cook adobo, afritada, chicken curry, tinola, arroz caldo, and nilaga. My husband likes it when I cook oyakudon for him, but the ones that I can cook in my sleep are adobo and afritada."

She reveals that she cooks these Filipino dishes even when she's performing abroad.

"They are the easiest to make," Lea said. "When I'm away from home, they remind me of home when I cook them. So feeling ko, nakabalik na din ako sa Maynila. Parang ganun ang pakiramdam: I'm back in my mother's house or I'm back in my own home and cooking these dishes and it makes me feel less homesick when I make those dishes when I'm away. So, masarap siyempre pakiramdam ko when I have this comfort food that I made."

SCENE STEALER. In the middle of the interview, Lea's daughter, Nicole Beverly, suddenly sat on her mother's lap and playfully grabbed microphones while imitating what her mother was saying. Lea introduced her daughter to the press and told her that she had nothing to worry about. Nicole felt at ease in front of the cameras pointed at her and at one point, she even stood up so she could pose properly for the paparazzi.

(CLICK HERE to watch the video of Lea and Nicole together.)

Since Nicole appeared to be very comfortable around cameras, members of the press asked if Lea will allow her daughter to shoot commercials in the future.

"It really depends on the brand that they would want her to endorse," she replied. "But I kinda want to hold back before getting her into this. It doesn't mean it's not a lot of fun to do but it also means a lot of hard work, and I don't know if she has the patience for it kasi to endorse for a brand that means commercials, recordings, it means press conferences, photo sessions and all that. All of that takes patience and I'm not sure that she's ready yet for this.

"If the offer's worth taking and the brand is something we can trust, and if we aren't trusting it already, if it's something naman na bagay for her. Then it only then when we'll say okay."

Lea then shared her observations regarding her first-born child.

"I try to bring her along as often as possible and she likes to come along din, e. She enjoys the attention she gets when she's around us. She seems to enjoy it and she's not intimidated by the presence of new people and media. And it's good because it's a big part of mommy's life, for her to see that it's a good thing hindi niya kailangan ikatakot."

What if she enters showbiz?

Lea recalled how she herself started out in showbiz.

"Me, I don't know, e. It's something na I felt God wanted for me but not by any other human being. Like my cousin—a ballet dancer, prima ballerina—she said, 'This is chosen for me, God chose this for me.' That's what would she say and I was listening to her say that and you know what, that is kind of what I feel, na parang ang Diyos mismo ang pumili ng buhay na to para sa 'kin, and that I was made to do this job.

"But in [Nicole's] case, because she's my daughter she has to actually want it. I mean, she can be blessed with all the talent in the world. But if she has no desire to do this, then obviously I can't force her. I'm not going to make her do this if she doesn't have the desire and the willingness to learn, you know, everything you need to learn in order to do this well. It's not all about talent and patience. When you have to wait for hours and hours for the movie set or photo shoot or wherever. That's just the way it is, that's the way the job is."

Will she allow Nicole to join showbiz if she asks permission in the future?

ON MOVIE WITH AGA MUHLACH. Lea reiterated what she said during her April 7 interview that she has set aside time this November to shoot a movie with Aga Muhlach. (CLICK HERE to read related article.)

"I set aside the time at the end of this year already. So now it's all about choosing the script and once that happens, madali na yun, e. And I know who's my leading man already, that's a given, I already know. I have been texting him [Aga], 'I set aside time na at the end of this year, let's do this, let's do this na.' And he's like, 'Basta I'll take care of you, Lea, don't worry about it. It will be special for us and everybody.' Okay, sige pinangako mo sa 'kin 'yan so I'm depending on Aga to make this special."

Will she be open to doing a bed scene with Aga?

"I asked him, 'What's up with you being paired with somebody 23 or 24 years old? What's up with that?' So I kinda want to do this with him because we don't have to be young. We can just be who we are. I saw the movie It's Complicated and they're older, sexy and so smart and incredibly funny. I said we need to do a movie with people like that. Something about the older ones being savvy and smart."

When asked to share her ideas for her upcoming movie with Aga, Lea had this one request: "I think he's 41 and I'm 39... I'm just hoping please do not give us puppy love anymore because we have families and children. Wala namang maniniwala if we do a movie where it's pa-cute. We also have to consider the eye of the people watching. We'd want to give them something nice to look at."

"Yeah, but only on one condition: I will not pretend to be young. I mean the story has to be, one of those older woman falling in love with somebody younger or younger man falling in love with somebody older. For me, it's realistic. I don't want to pretend that I'm 25 coz I'm not anymore. For theater, I can do that because the nearest person to you is 20 feet away. I can hide a lot of things and I don't look naman that old. But for film where is a close-up like this [gestures with her hands], there's only so much you can hide."

Does she have any actor in mind who could serve as her next onscreen partner?

"John Lloyd [Cruz]! I love you John Lloyd. I've seen his acting, I watched him and I was like, 'Oh, my God! Ang galing-galing mo!' There are so many guwapos out there, but John Lloyd kasi is interesting. Incredibly talented, so I'm interested in that," says Lea with a big smile.